I recently travelled to western Zambia to see first-hand how Sightsavers supporters are protecting people’s sight from blinding trachoma.

We’d arrived in the capital, Lusaka and driven nine hours down to the Western Province. The landscape was beautiful – green and lush in parts, then increasingly dry and dusty as we drove closer to the district of Mongu.

After a few days of watching eye screenings being carried out in local villages, we visited Lewanika Hospital in Mongu, and were introduced to Mr Ndalela.

The biggest barriers to treatment

Ndalela (as we were told to call him) is a doctor who travels by motorbike to do outreach work in the poorest, most remotest villages that have little or no access to medical treatment. He is very passionate about his work, describing it as “a calling, rather than a job”.

Ndalela explained to us that geography and the inaccessibility of the villages was one of the biggest barriers to being able to treat people in Zambia, as it was incredibly difficult to reach them.

The struggles of reaching rural communities

Later in the week, Ndalela invited us to visit a remote village, about a three-hour drive from Mongu, where he’d heard reports of children suffering from trachoma.

The journey was completely off-road through sand and bushland. Parts of the route were very sandy, and we had to stop a few times to dig the car out.

Initially it felt like a bit of an adventure, but after three hours of rattling around like a pea in a can (which you can get a taste of in the video below) we were all relieved when we finally stopped.

Once we arrived, we were introduced to the village elders, who thought it was hilarious that I have what they called “a boy’s name”, and kept asking why my parents named me after a man. We were then taken to meet a family whose children we were told had trachoma.

We found the children – Inutu, Sililo and Maimbolwa – sat outside their house, and it was immediately clear they were suffering. We were greeted by their aunt, Likando. It turned out that their mother, Namangolwa, was working on the fields, but Likando was happy to talk to us and let us speak to the children.

These children had a huge impact on all of us. Even Kennedy and Ngoza, our colleagues who work in the field and see patients all the time, were shocked.

All three children had visible trachoma, with weepy eyes, discharge and constant eye rubbing – and Inutu’s case looked particularly severe. Ndalela examined Inutu first and confirmed that without treatment she would be blind within three years.

Inutu is a very sweet but shy girl

I spoke with Inutu, who was delightful. She was very sweet and shy, and talked in a whisper. She likes to write and her favourite thing at school is learning English – she tried out a few phrases on me, and was very good. Inutu likes school so much, and forces herself to go even when in severe pain, which is often.

When her and her brothers’ eyes didn’t hurt too much, they liked to play football together. She enjoys looking after them, but told me that Maimbolwa is the naughtiest brother – when his eyes are less painful, he is cheeky and chases his siblings around.

After speaking with Inutu, Ndalela checked Sililo and Maimbolwa’s eyes and found they both had trachoma, so they too would require treatment to protect them from future problems.

Towards the end of our visit, their mother Namangolwa came back from the fields. Ndalela examined her and found that she too had trachoma, and prescribed her antibiotics. Ndalela explained to her about the importance of washing the children’s faces for protecting against trachoma, and assured her that he would return to the village soon to make sure the antibiotics were working.

I left the village that evening (accompanied by a leaving party of local children) feeling optimistic for Inutu and her family. Now they had the treatment they needed, they would soon be free from the pain of trachoma, and the children would be able to continue in school and fulfil their potential.

The long journey back to Mongu was made that little bit more enjoyable when we stopped to enjoy the Zambian sunset.

Why we desperately need your help

I feel incredibly privileged to have travelled to Zambia and seen Sightsavers’ work first-hand. It was an amazing yet tough experience: the scale of need is huge, but such simple things (one tube of ointment, or a tank of petrol for Ndalela’s motorbike) can make a huge difference to someone’s life.

In the rural areas life is very hard, and being visually impaired makes it twice as difficult. Unless the children are treated successfully, they have no way of attending school and escaping the cycle of poverty. The impact of treatment will continue to resonate throughout their lives, as it enables them to continue learning, provide for their family and live a full life.

We only went to one corner of Zambia, and there is clearly much more to do. But this trip was a clear reminder of why the work that our supporters make possible is so important.

You can help us reach more villages like Inutu’s

DONATE
Sightsavers' Jo Howard, stands in the shade and talks to the villagers.

Something as simple as a tube of ointment can make a huge difference to someone’s life. 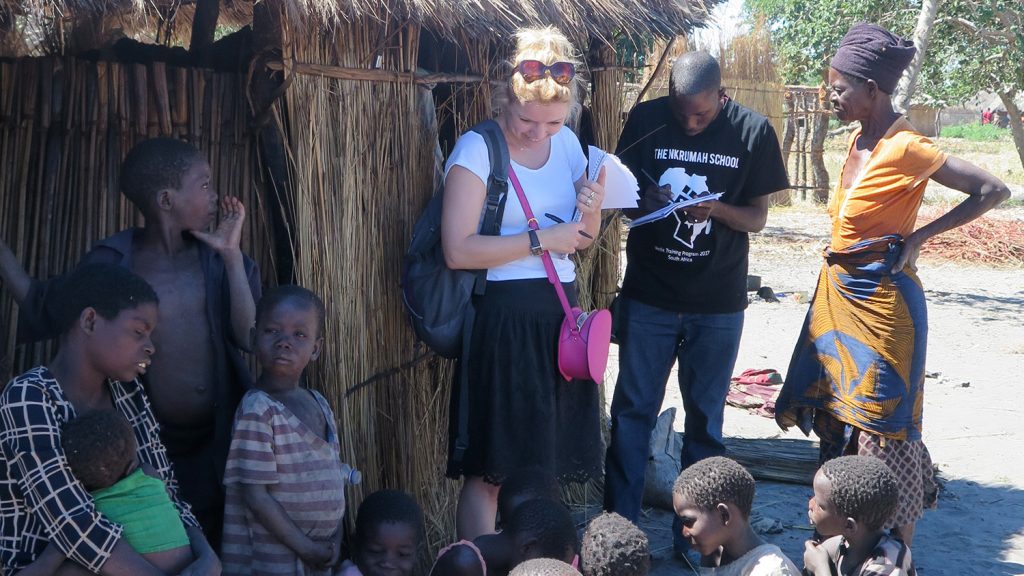