Sunday 7 October marks the next presidential election in Cameroon. I hope that for many people, this year will be their first real opportunity to get to a polling station and vote.

For people with disabilities in Cameroon, this is no easy feat. There is a widespread belief that disability is the result of witchcraft or sin, so even a road traffic injury can mean individuals are rejected by society.

People with disabilities find themselves in poverty, facing prejudice and barriers at every turn. This means the vast majority don’t get to have a say at all in local or national politics in Cameroon.

Our work, and the challenges we face

In Sightsavers’ Cameroon office we work with incredible individuals who won’t accept the labels that society has given them.

Since 2010, we have been working with other disability groups across the country to build their participation in the political arena and to speak about the issues faced by people with disabilities. It is their human right to have an equal say in the policy decisions that affect their lives.

We started our political inclusion work in 2010. But before we could begin making political participation of people with disabilities a reality, we needed to get to the heart of the issue: changing people’s attitudes.

Many socially influential people we spoke to during our research saw people with disabilities as objects of pity and charity.

They would often ask why we wanted to give them the additional ‘burden’ of voting. We didn’t just hear this from partner organisations and politicians, but also from people with disabilities themselves.

Voting can be difficult for people with disabilities. Some don’t have a birth certificate so cannot get a national ID card, which means they are excluded from registering to vote. For those who have a birth certificate, money is needed to obtain a national ID card, and they must travel to the nearest ELECAM office to register, which could be some distance away and inaccessible.

If you have a disability, it can be almost impossible to travel anywhere without help. So, in the daily struggle to make ends meet, people with disabilities are getting excluded from politics; it can seem like this is a luxury for others to enjoy. 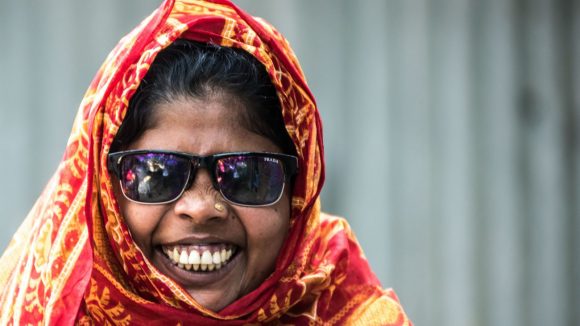 Our work to promote disability rights

We fight to make sure people with disabilities can take part in the political process at all levels, including voting in elections.

It’s incredible to see how entrenched opinions can dissolve in the face of evidence. Once people realise they have rights and are armed with the facts, there is a shift in thinking. We are seeing a growing movement in this country. It took many people, a lot of organisation and some imagination, but we are getting there.

We focused on the UN Convention on the Rights of Persons with Disabilities and the national disability act, in which the right to vote and participate in politics is clearly laid out. We shared real examples where we know disability inclusion is working.

At the last presidential elections, we worked with Cameroon’s electoral commission, ELECAM, to test accessible polling stations, ensuring they had ramps, braille ballot labels and voting boxes at floor level so someone using a wheelchair or of shorter stature could use them comfortably. We worked with partners to create posters and brochures and undertake door-to-door visits. People with disabilities were trained to observe election proceedings in order to report on their inclusivity.

Awareness is there, and it’s growing. ELECAM has banned all upstairs polling stations and staff have been very receptive to disability awareness sessions, so we hope for more progress this year.

Development interventions can be costly, time consuming and complex. However, changing attitudes doesn’t take any extra investment. Solutions can be found if you have the awareness and willingness to do it.

We are still dealing with stigma and discrimination, but many of us are optimistic that change is on the horizon – because it’s being led by people with disabilities themselves.

30,000
Cameroonians with disabilities registered to vote in 2013

Joseph Oye
Joseph is our Cameroon Country Director, and has worked for Sightsavers since 2002. He says: “I enjoy working for Sightsavers because we bring about change that wouldn’t have happened without our intervention.” LinkedIn