The little campaign that has made a huge difference

As we celebrate the fifth anniversary of our disability rights campaign, Natasha Kennedy, Sightsavers’ Head of Campaigns, looks back to when it began.

I joined Sightsavers nearly six years ago with one specific task: to develop a campaign to change UK international development policy, to improve the lives of people with disabilities living in developing countries.

The campaign had to deliver on two fronts. First, it had to influence policy in an area that hadn’t seen any traction in nearly 14 years (this is why ministers and decision-makers referred to disability-inclusive development as the neglected area of development). Second, it had to engage a public audience on an issue that Sightsavers had never publicly campaigned on before. 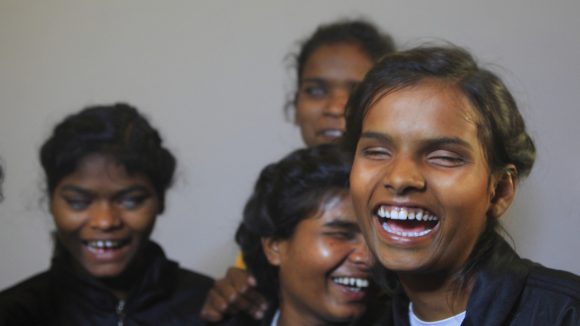 From plans to action

While planning the campaign, it became very clear to us that if people with disabilities in developing countries were going to have their voices heard and rights recognised, they needed to be visible to the people who make the development decisions – they needed to be in the picture of global development.

The first phase of the campaign, launched on 3 December 2013, was to make people with disabilities a priority for UK international development policy. We launched a petition, which gathered more than 20,000 signatures, and publicly campaigned for two years for policy change.

The result was that the UK Department for International Development (DFID) published its first disability framework in December 2014, and in 2016 a development review committed the UK to being a global leader on disability. It was a fantastic achievement and one that the campaign had a key role in achieving. But what did the policy changes actually mean for people with disabilities in the world’s poorest countries?

What we soon realised was that the impact and reach of these new policies would only achieve so much. We realised we had to be more ambitious to achieve our vision – a world where all people have their rights to dignity, respect and opportunity upheld.

We decided that the campaign needed to operate at a global level, to influence not only the UK government (through DFID) but also the UK’s partners – places like the World Bank and the UN, institutions that had the potential to bring about global change.

This was exciting and terrifying at the same time. We weren’t sure if our campaign could really change policy at this level. But with the support of our campaigners, we’ve spent the last two years of the campaign figuring that it could.

In the past two years, the World Bank and UN Women have both committed to new disability policies, and the UN disability committee elected six (six!) women in its 2018 elections, including our colleague and dear friend Gertrude Oforiwa Fefoame, when the real risk was that no women would be elected. The UK government, along with IDA and the government of Kenya, pledged to host a Global Disability Summit, and when it was held, more than 170 commitments were made from governments, civil society and organisations committed to prioritising people with disabilities.

Changing the world, one UN committee at a time

One key highlight for me personally over the past five years was our #EqualUN call for better gender representation on the UN disability committee. I remember sitting outside the committee room at UN headquarters in New York, feeling sick with nerves. It was our most ambitious (or, as some said, impossible!) campaigning to date.

Using the campaign to engage in a highly political process at the UN, where the campaign’s ability to influence could be limited or restricted because of political sensitives, was always a gamble, but we knew it had to be done. After all, how could people with disabilities living in developing countries be empowered to participate and claim their rights if the UN committee dedicated to upholding those rights wasn’t fully representative?

When the results came in and we realised that the number of women on the committee had risen from one to six, I couldn’t believe it – that is, until I was swept up by Gertrude’s Ghanaian supporters and colleagues as they danced and sang their way through the halls of the UN!

The achievements of that day sum up what our campaign is all about. It’s the platform we use to amplify the voices of people who continue to have their rights ignored. Over the next five years, we want our campaign to empower people with disabilities living in developing countries to hold their own governments, and global organisations like the World Bank and the UN, to account. And we’ll keep fighting for the great policy commitments that have been made translate into real action and real change.

Our ambition is higher than ever. If the last five years are anything to go by, I’m expecting the next five to be even more exciting and challenging – but no one ever said bringing about global change was easy.

Bring on the next five years. I’m ready. Are you?

Natasha Kennedy
Natasha is Head of Multilateral Engagement and Campaigns at Sightsavers.
LinkedIn