Braving the odds to combat NTDs in Democratic Republic of Congo

Sightsavers surveillance manager Ndellejong Cosmas Ejong explains what has already been achieved in DRC, and how we’re pushing ahead to tackle these debilitating neglected tropical diseases.

Democratic Republic of Congo (DRC) is still suffering from armed conflict, years after the Congolese civil war officially ended. It has also been deeply affected by Ebola, as well as a number of public health problems such as neglected tropical diseases (NTDs). It is thought that of the country’s population of 84 million people, about 50 million are at risk of and need treatment for NTDs, which can cause excruciating pain, disability and trap people in poverty.

In response, the United Front Against River Blindness (UFAR) and Sightsavers work in collaboration in DRC to support the Ministry of Health in the fight against NTDs. Together, we are aiming to eliminate river blindness and lymphatic filariasis (LF) and control schistosomiasis and soil-transmitted helminths (STH) in the country.

This work couldn’t happen without the support of the British public and the Department for International Development (DFID) which, through its UK Aid Match scheme in 2015, started funding river blindness and LF elimination activities. This work has been taking place in Ituri North and Katanga South projects through Sightsavers and UFAR. In 2017, funding from GiveWell was secured through Sighstavers to help address gaps in schistosomiasis and STH treatment that were identified through surveys carried out in Ituri North.

The Ituri North NTD project borders with Ituri South, which still has sporadic tribal conflict, and this instability has led to mass migration of people from the south to the north. What’s more, the few cases of Ebola detected in Tshiomia and Mandima in Ituri South (about 100km from the project area) could prevent treatments being distributed to people at risk of NTDs.  Amid these ever-changing dynamics, the valiant hearts in the communities – the volunteer community directed distributors (CDDs) – have braved the odds alongside the health workers to ensure mass distribution of treatments is not interrupted. These workers regularly receive guidance from their local authorities, the Ministry of Health and the Congolese military to ensure treatments are delivered safely. 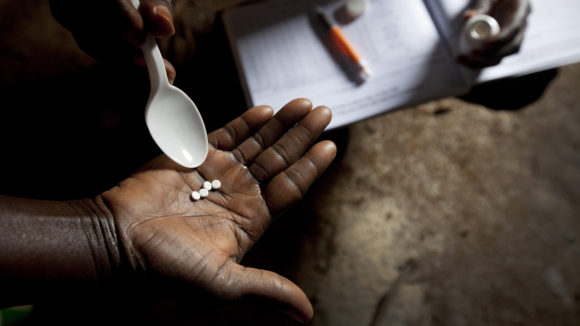 Our work in DRC

In 2017, we helped to distribute more than 3.6 million treatments to prevent debilitating neglected tropical diseases in Democratic Republic of Congo.

What have we learned in DRC?

The road ahead is promising

These things we’ve learned give us many reasons to be hopeful about controlling and eliminating NTDs in DRC. In addition, since we began in 2016, our geographical spread has expanded: we’ve moved from 16 to 19 health zones, with three additional schistosomiasis-endemic areas added in 2017. The most recent reason to feel positive came on 5 September 2018, when the National Oncho Elimination Expert Advisory Committee (NOEEAC) was formed. The group will be vital for helping to eliminate river blindness (onchocerciasis) in DRC: it will guide the elimination work and will aim to address implementation gaps in three zones: Aru, Logo and Mahagi in Ituri North.

The Sightsavers team and I are proud to work with several organisations to deliver this vital work: UFAR, the Ministry of Health, a network of communities, donors such as GiveWell and the UK government’s Department for International Development, plus partners including RTI, the Schistosomiasis Control Initiative and the Liverpool School of Tropical Medicine. Progress is being made to combat NTDs in DRC, but there is more work to do and we must continue to work in collaboration to continue to brave the odds and achieve our goals.

Neglected tropical diseases are most prevalent in rural areas, urban slums and in conflict zones. They affect some of the world’s poorest people and can cause severe and lifelong impairment.

Ndellejong Cosmas Ejong
Cosmas is Sightsavers’ Surveillance and M&E Manager, and is based in Cameroon.