“That lady who was going blind? Look at her now!”

In Turkana County in Kenya, Sightsavers’ Sarah Filbey visits an eye camp that treats trachoma and cataracts, ensuring everyone gets the life-changing help they need. 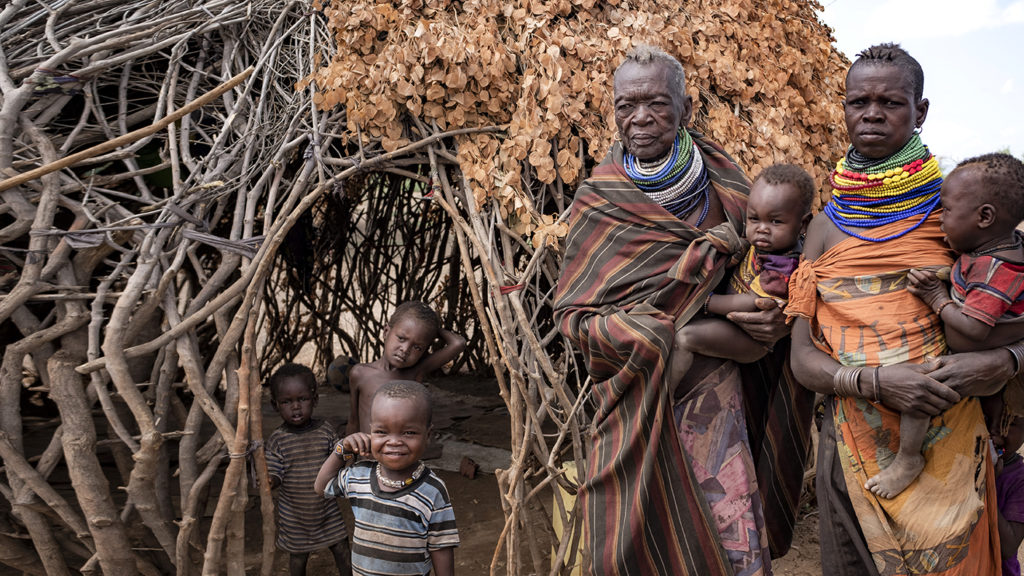 Outside the window of the car are termite mounds the height of houses. One after another, these towering kingdoms of orange and gold come and go, as our car speeds towards its destination.

The landscape is vast, arid and beautiful, with its warm-coloured sand and scant, scrawny foliage. A camel pops into view – a rare sign of movement on the bumpy five-hour journey through what looks like desert but is technically semi-desert, according to my Kenyan colleague.

This is Turkana County in northern Kenya.

The tarmac regularly breaks up or disappears entirely, sending us careering off-road onto dirt tracks. As I grip the handle on the roof of the car, I learn that the medical team from Lodwar District Hospital –  who travelled ahead of us earlier in week – make this journey once a month to hold eye camps in Kakuma Mission Hospital, a health facility located in the far north-west of Turkana County, near the border with Sudan. Locals are expected to pay for their treatment, leaving the poorest residents unable to afford help.

Lodwar is the capital of Turkana County: the team’s usual base at Lodwar Hospital is the government regional referral hospital for the entire region, which has a population of almost a million people. This medical team conduct outreach camps and operations across the county as part of Sightsavers’ CATCH programme.

Kakuma, our destination, borders South Sudan, Uganda and Ethiopia. As well as its harsh climate, it’s also known for being the site of Kenya’s second-largest UNHCR refugee camp. The locals here are nomadic livestock farmers, and providing healthcare for a population with no fixed abode is difficult.

Trachoma, a potentially blinding eye disease, is all too common here: repeated infection leads to scar tissue on the eyelids that causes them to gradually turn inwards and scratch the cornea, causing intense pain and, eventually, blindness. The flies that surround the cattle carry the disease, leaving the farmers open to infection. There’s also a lack of water sources, which means people don’t wash their faces regularly, contributing to the spread of the disease. 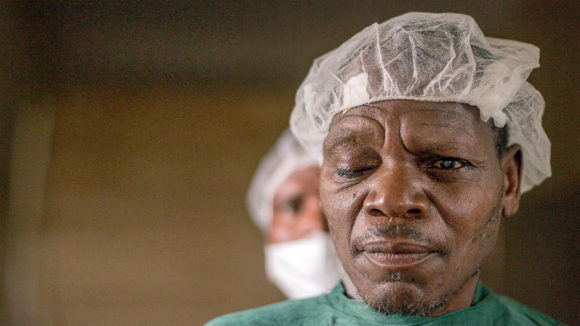 The programme started in 2015 and ended in 2019. With support from UK aid, it piggybacked on trachoma initiatives funded by the UK government and The Queen Elizabeth Diamond Jubilee Trust.

On the evening of our arrival at the refugee camp, we’re taken to a run-down building within the staff compound: these guest quarters are to be our accommodation for the next two nights. With broken windows and ripped mosquito nets over the single beds, we double up the nets with our own to keep out the bugs, and bathe out of buckets. At night the temperature remains above 30 degrees. I’m thankful for the fan provided, and grateful that the electricity to the building is still connected.

On our first morning at Kakuma Mission Hospital we find a line of patients waiting quietly on a bench outside the surgical room, some with bandages over one eye. It’s the end of the week of eye examinations and operations, and we’re told the corridors were even busier earlier in the week.

Many of the women wear striking strings of beads around their necks: I notice one woman also has a pair of tweezers hanging from a silver wire at the bottom of her beads. I’ve heard of this practice, but haven’t seen it before: it’s a brutal home remedy for trachoma sufferers. As their eyelashes start to turn inwards, they use the tweezers to pluck out the lashes and ease the pain. 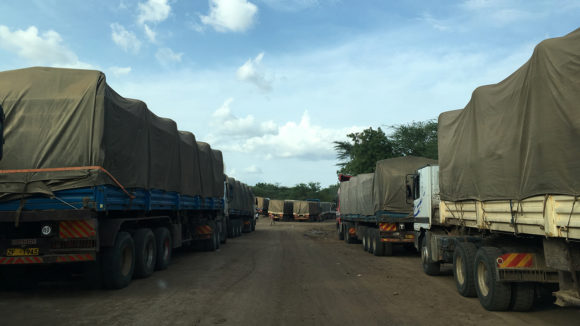 The good news is that, with the help of Sightsavers and partners, the number of trachoma cases in this area has fallen significantly. Thanks to funding from UK aid, the CATCH programme has also ensured that patients who visit trachoma screening camps like this one with another eye condition, such as cataracts, have been able to get the treatment they need. The programme ended in 2019, shortly after our visit, and a survey will now be carried out to determine whether trachoma is still a public health programme in Turkana.

The team tells me that during this week’s camp, 15 people were diagnosed with both trachoma and cataracts. There’s little point treating one but not the other, which is why eye camps that can treat both conditions have proved so effective.

These camps aren’t always based at the hospital; often the team travels off-road into remote regions to host camps in the most hard-to-reach places, where trachoma prevalence is the highest.

For trachoma patients such as Ensinyen, an octogenarian, travelling to the hospital can not only be a lengthy, expensive journey, but also often requires a great leap of faith. “When this eye sickness began, we didn’t even know where town was, and had never visited the hospital,” she told us.

Ensinyen now considers herself lucky that the doctors visited her community and carried out eye operations there. But at the time, she was afraid.

“I didn’t trust the doctors, but I decided to give them the benefit of the doubt,” she explains. The pain had become so bad that Ensinyen felt it was worth the risk. A straightforward operation restored her sight, and she is able to look after her grandchildren once again while her daughter goes out to find firewood to sell. “My story encourages others to come for surgery,” she tells us proudly. “They say: ‘Do you see that lady who was going blind? Look at her now!”’

Susan Lokaala, a community health worker, takes us to visit Ensinyen at her home, which involves crossing a wide, dried-up river bed. Health workers such as Susan are nominated by the ministry of health, with help from community groups, and are trained by Sightsavers to identify potential eye conditions in their communities and refer people to the nearest health facility.

A women walks across a vast dried up river bed.

“There’s a lack of water sources, which means people don’t wash their faces regularly, contributing to the spread of trachoma.” 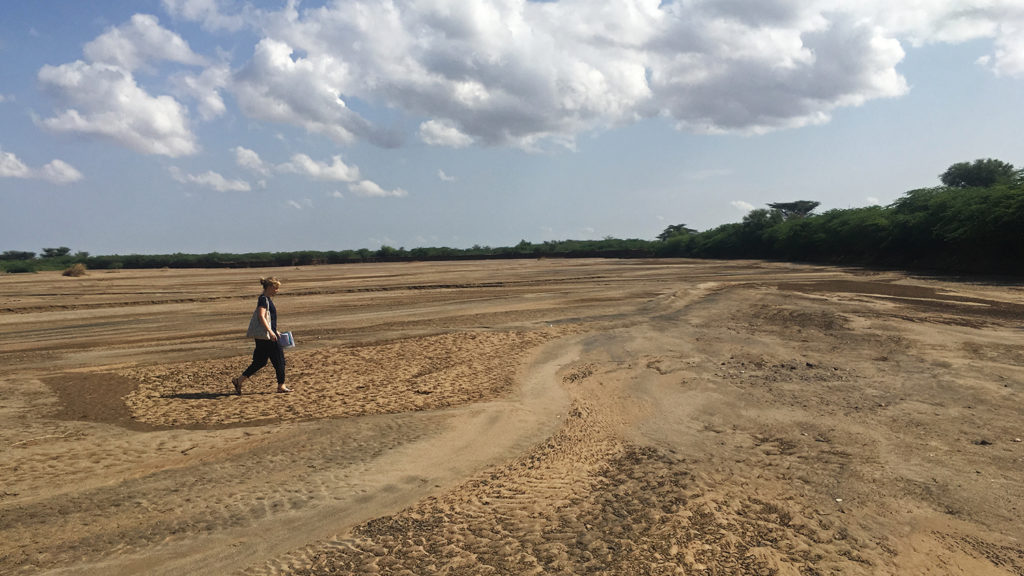 Susan and her fellow community health workers are vital to the success and effectiveness of the eye camps, and often help allay people’s fear of hospitals, surgery and the unknown that could otherwise prevent them from seeking treatment. Most of the people we spoke to at the hospital eye camp had been referred by a community health worker.

On the final day of the camp, our second day visiting the hospital, Sightsavers’ Edwin Simiyu tallies the number of patients treated. In total the team carried out 124 operations to treat advanced trachoma, and 39 cataract operations, averaging 27 procedures a day over six days. Edwin explains that this split between trachoma and cataracts is not necessarily typical, as there has been significant progress made in reducing the number of trachoma cases in this area.

As well as coordinating Sightsavers’ work, Edwin is also a qualified eye surgeon. During this particular camp, he has carried out many of the sight-restoring operations himself.

It has been a long week for Edwin and his medical team, with so many patients to see – not to mention the hot, restless nights. But there is still the long car journey home to Lodwar, where they can look forward to a cooler climate, the comfort of their own beds and a well-earned rest. 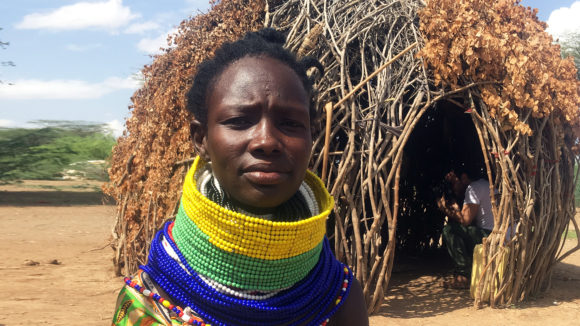 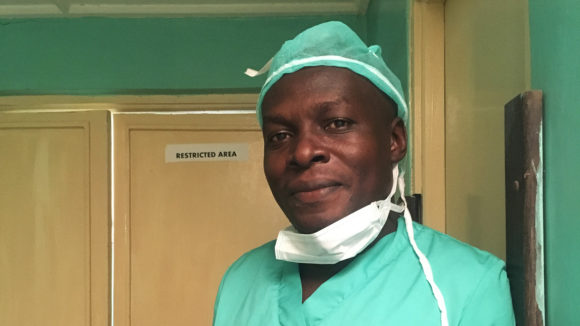 Thanks to the help of Sightsavers and partners, the number of trachoma cases in this area has fallen significantly.

Find out what we’ve learned from the programme