A group of friends from north London have completed a charity ‘pub run’, raising £2,500 for Sightsavers after being inspired by the story of a young mother whose sight we restored.

On Saturday 2 June, the group ran from Finchley Central to Camden, visiting five pubs en route. The tradition began in 2017, and this year the runners decided to raise money for Sightsavers after hearing about Laurinda, a young mother from Mozambique whose vision was restored thanks to a Sightsavers-supported cataract operation.

“Laurinda was the reason we chose to run for Sightsavers,” said Kalpesh ‘Kalps’ Patel. “None of us knew Laurinda, but none of us will ever go through her hardship. We were running for Laurinda and the countless numbers like her all around the developing world.”

Several members of the group overcame injuries – from back spasms to knee problems – to take part in the event. The elite runners’ race was won by Sanj, with Pinz and Kiran close behind.

As part of their fundraising efforts, the group also collected donations from family and friends, organised a World Cup football sweepstake that sold out in four hours, and arranged a charity auction to persuade friends to run with them.

So do they plan to do it again next year? “Definitely! We had so much fun and raised money for a great charity at the same time,” said Kalpesh. “We all had a final toast to Laurinda, and another to Sighsavers for giving her a second lease of life. 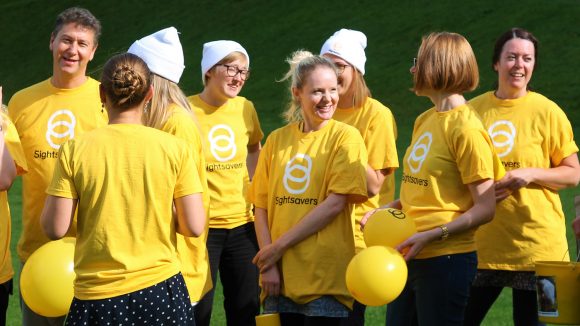 Want to help us raise money?

Inspired by Kalpesh and his friends? There are many ways you can support us, from hosting a coffee morning to doing a skydive or trekking across Asia.