Government leaders, health workers, volunteers and international aid workers have gathered in Ghana’s capital, Accra, to celebrate the elimination of blinding trachoma in the country.

In June this year, the World Health Organization (WHO) announced that Ghana was the first country in sub-Saharan Africa to eliminate trachoma as a public health problem. This is a major achievement given that at the beginning of the century, it was estimated that 2.8 million people in the country were at risk of this devastating but preventable disease.

At the ceremony on August 7, the official certificate of elimination was presented to Ghanaian Minister of Health Kwaku Agyeman-Manu by WHO representative Dr Owen Laws Kaluwa.

Organisations and individuals who contributed to the groundbreaking achievement were invited to the day-long event, including government leaders, medical professionals, health volunteers, community leaders in the former trachoma-endemic districts, and representatives from international organisations including Sightsavers and WHO.

Sightsavers Global Trachoma Programme Advisor Dr Agatha Aboe said: “We want to congratulate Ghana on this momentous day. We are so proud to be celebrating this landmark. Many of us have been working towards it for many years and I can barely believe the day has come.

“Trachoma blights millions of the poorest people in the world and has now been eliminated in Ghana. It is an incredible achievement only possible due to collaboration between a number of partners who have been committed to eliminating trachoma from Ghana and other parts of the world.

“However, there is still much work to be done. It is now really important that we share what we have learned with other countries so they can also eliminate this awful disease. Worldwide elimination of this ancient disease is within our grasp.

“It is also vital that Ghana now concentrates efforts to also eliminate other neglected tropical diseases, such as river blindness, which we hope to also be celebrating soon.”

Between 2000 and 2017, Sightsavers has worked towards trachoma elimination with the Ghanaian health service and partners by organising eye screening clinics, training thousands of local health workers and volunteers, providing equipment, antibiotics and surgery, and collecting data to show who needed treatment and where they were.

Watch the video below to see the story of trachoma elimination in Ghana. 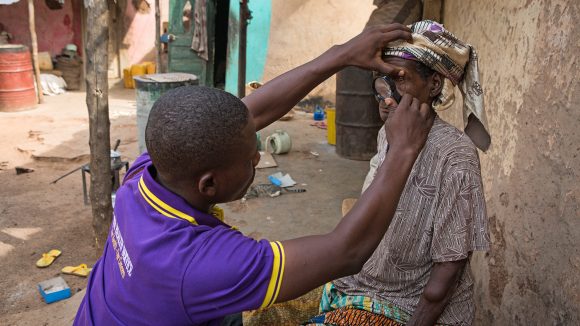 The final days of trachoma in Ghana

Sightsavers’ Kate McCoy followed a team of eye care workers as they raced through cities and villages to find any remaining patients.

Read about our journey to eliminate trachoma