Survey highlights lack of knowledge about UV threat to our eyesight

A new Sightsavers survey shows that 30 per cent of Brits don’t realise the effects that UV damage has on their eyes, with nearly half not choosing their sunglasses for UV protection.

Sightsavers, in partnership with People’s Postcode Lottery, commissioned a survey that found 90 per cent of British people wear sunglasses, but less than half (40 per cent) wear them to protect their eyes from UV damage.

Worldwide, 65 million people suffer from cataracts, with the World Health Organization estimating that 20 per cent are caused by overexposure to UV rays, and are therefore avoidable.

Despite this, almost a fifth (17 per cent) of respondents in the survey think sunglasses are a waste of money, while a further 15 per cent don’t see the point of them at all. Overall, Brits are choosing comfort over eye health, with more than a quarter (29 per cent) admitting they don’t find wearing sunglasses comfortable.

Optometrist Dr Imran Khan, chief technical lead at Sightsavers, says: “Sunglasses are not simply a fashion statement. What this survey shows is that most people are not wearing shades to protect their eyes, and we want to change that. Not protecting your eyes from UV rays can cause long-term eye damage and lead to issues such as cataracts, and even eye cancers. This is especially an issue closer to the equator and in areas of high altitude, where UV levels are stronger.

“We recommend that not only should people wear sunglasses whenever it is sunny, but they must choose a style so their eyes and the area around their eyes is well covered. Whatever the cost of the sunglasses, they should have a sticker to indicate they meet EU standards and block at least 95 per cent of all UV rays. Sun cream should also be applied to the skin around the eyes to offer additional protection.”

The X Factor singer Danyl Johnson, an ambassador for People’s Postcode Lottery, said: “This is a really important campaign to remind people that the main purpose of sunglasses, regardless of the cost and style, is whether they are going to protect your eyes from sun damage.”

Thanks to the players of People’s Postcode Lottery, Sightsavers is helping to provide life-changing inclusive eye health projects in sub-Saharan Africa. This support is helping to fund essential eye health services such as cataract surgery and glasses to correct visual impairments. Read more about the partnership 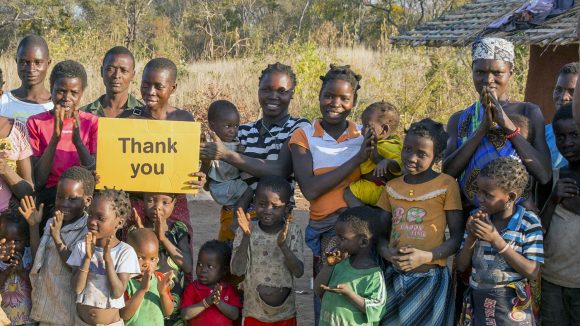 Sightsavers is a promoting society for People’s Postcode Lottery, with players of the lottery helping to fund our vital sight-saving work across the world.

The World Health Organization passed a Resolution on The World Report on Vision in an effort to reach the 1 billion people worldwide who do not have access to vital eye care services.

Marking the two-year anniversary of the Global Disability Summit

In 2018 the UK and Kenya co-hosted the first-ever global disability summit. We look back at what has been achieved in the two years since.