At the end of the two-year Commonwealth Fund, Sightsavers and partners have delivered 11.7 million treatments to manage trachoma and carried out nearly 32,000 surgeries for the advanced form of the disease in 10 countries.

Since 2018, Sightsavers and The Fred Hollows Foundation have supported the efforts of ministries of health and local communities in these countries to eliminate trachoma – the world’s leading infectious cause of blindness and which is part of a group of conditions known as neglected tropical diseases (NTDs).

The Commonwealth Fund was created to ensure that citizens in trachoma-endemic countries could get the eye care they needed. To achieve these goals, the partners have used the SAFE strategy – an approach approved by the World Health Organisation (WHO) to control the spread of trachoma – which includes surgery, antibiotics, facial cleanliness and environmental improvements. They have also trained thousands of local volunteers to distribute medicine and carried out more than 100 surveys to collect vital trachoma data.

The UK aid-funded programme has had great success in the road to elimination, inclusion and health-system strengthening, including:

Edwin Simiyu, a trachoma surgeon working through the Commonwealth Fund in Turkana in Kenya is optimistic about the future: “With availability of resources and commitment from all the stakeholders it will be possible to eliminate trachoma.”

Sightsavers continues its fight to eliminate trachoma with its Ascend and Accelerate programmes. 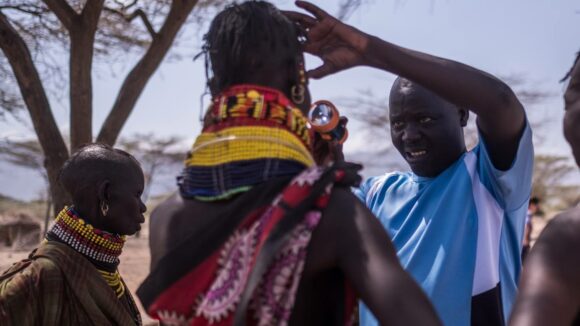 About the Commonwealth Fund

Thanks to UK aid funding, Sightsavers has led Commonwealth Fund work towards trachoma elimination in 10 countries.