From starting the year celebrating the first-ever World NTD Day, to diverting our resources to help with the pandemic, it's been a remarkable year for Sightsavers. 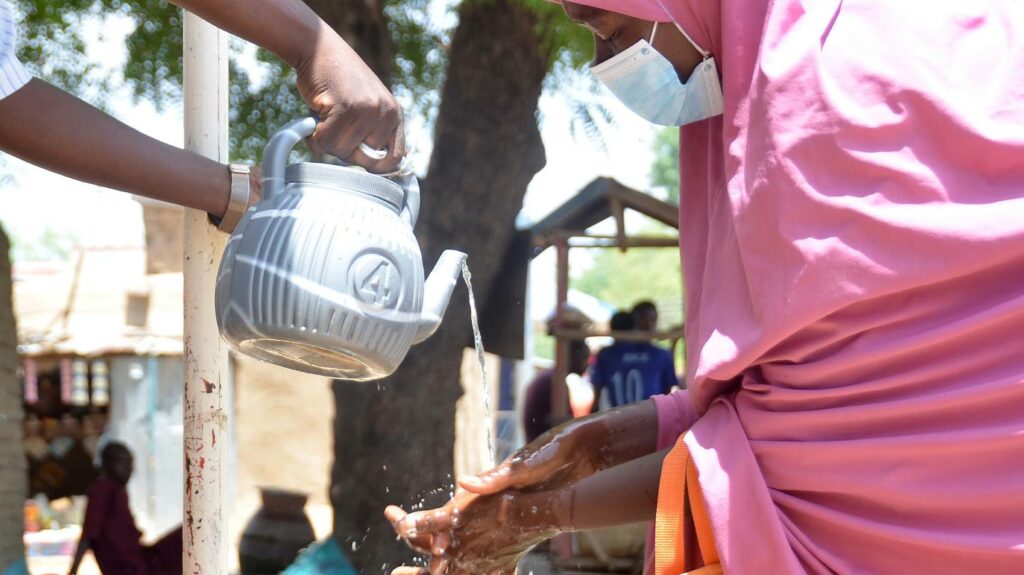 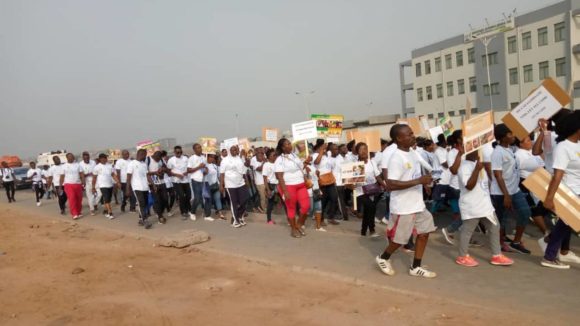 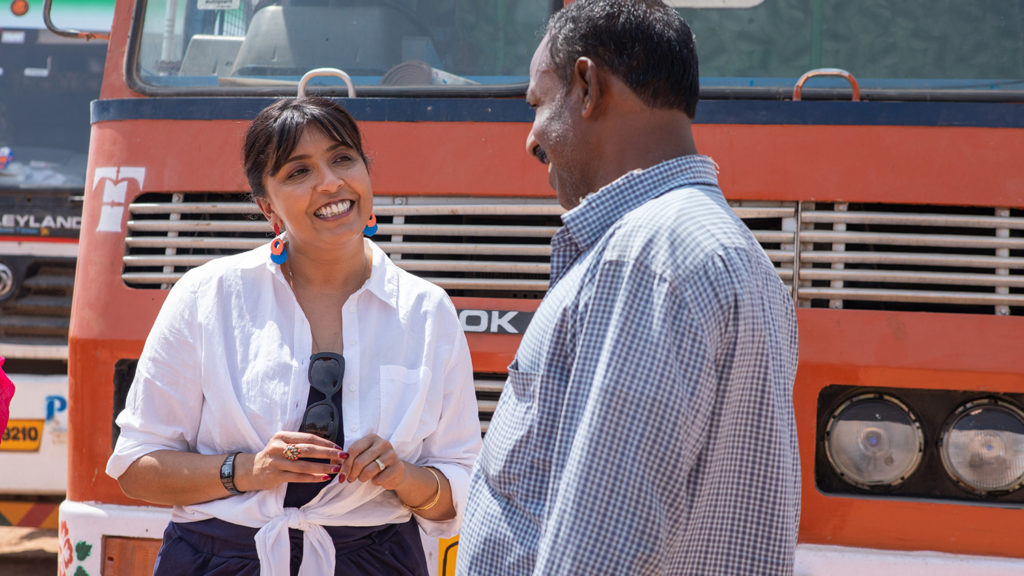 Many thousands of people die on Indian roads each year, according to World Health Organization figures. Many of these accidents are due to the poor eyesight of drivers. Sightsavers’ celebrity ambassador, British actress Sunetra Sarker, visited an innovative Sightsavers eye programme which aims to solve the issue. The programme encourages truck drivers to get their eyes tested, and receive a pair of glasses if needed, for free. Read the news story 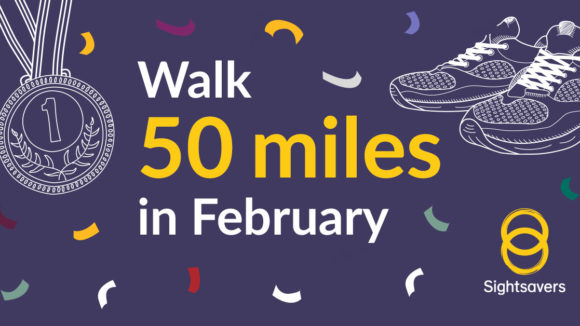 Also in February, we launched our first Facebook fundraising campaign. Walk 50 encouraged our supporters to get their walking boots on and cover 50 miles –  or more – in February. And more than 3,000 people rose to the challenge, often battling the elements, to raise money for Sightsavers. It was so successful we ran the campaign again in August, when our supporters raised a huge $28,830. About the campaign

A colourful tuk-tuk with speakers on the roof and three men stood by it. 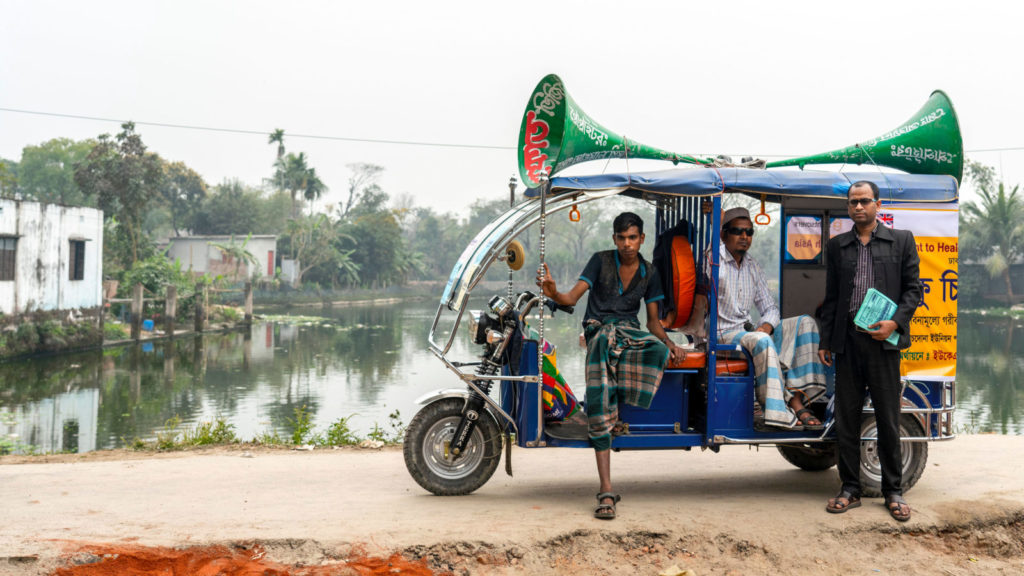 In April we highlighted the work of the 'miking' team in Bangladesh, a group of Sightsavers volunteers who drive around in a tuk tuk, spreading the word about Sightsavers' free healthcare programmes to people in rural communities, who normally do not have access to health information. Read more about the project

As the COVID-19 pandemic hit, Sightsavers staff all around the world began to work remotely full time. We wanted to raise awareness about the importance of keeping everyone’s eyes healthy while working at home. Little did we know we’d still be doing it eight months later! Read our advice 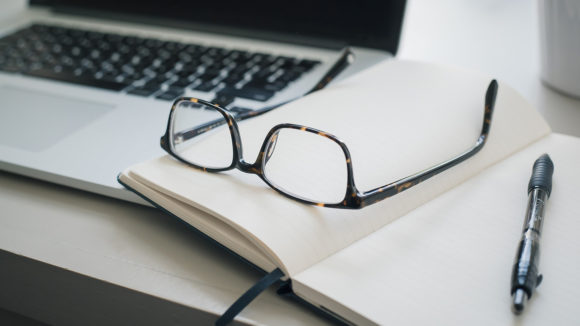 A woman using a wheelchair leaving a building. 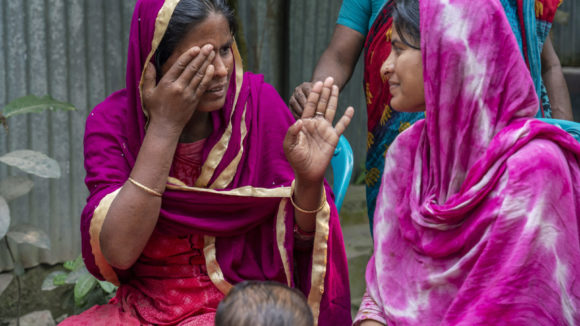 Sightsavers research highlighting inequalities in eye care was published in the Journal of Ophthalmic Epidemiology and Devex. The research, which took place in India, Pakistan and Tanzania, showed that women and those from a lower socio-economic background were often disproportionally affected by eye problems. Read the news story

Three people sit round a desk. 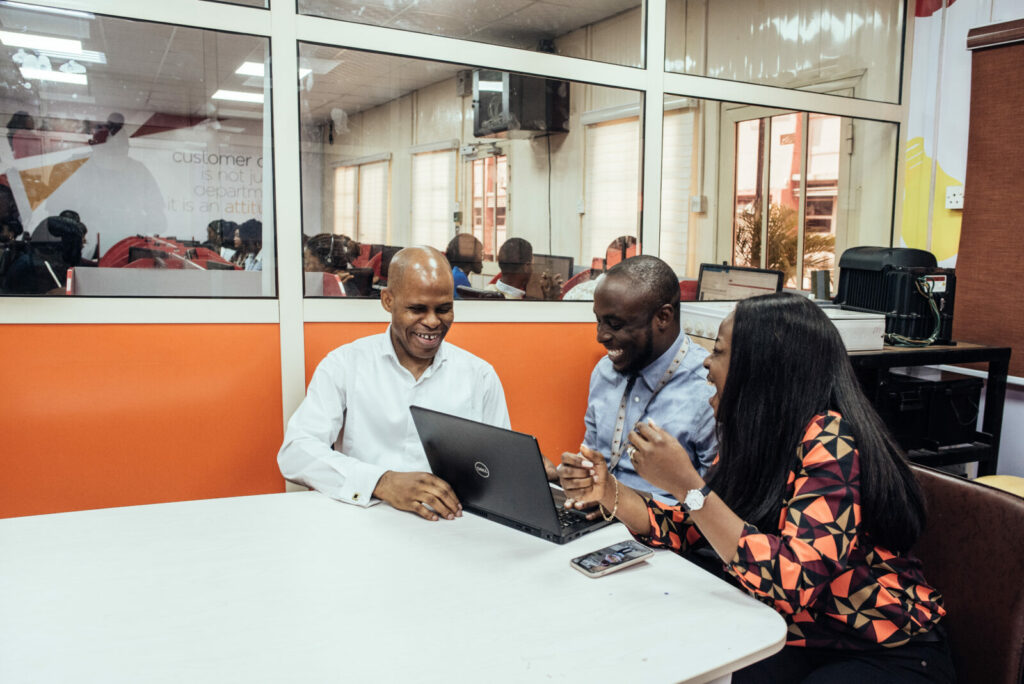 Sightsavers was proud to be part of the launch of the Inclusive Futures initiative, which brings together a consortium of 16 international development organisations, disabled people's groups and the public and private sector in seven countries. The initiative aims to ensure people with disabilities can access quality education, health and work without stigma or discrimination. Read about the initiative 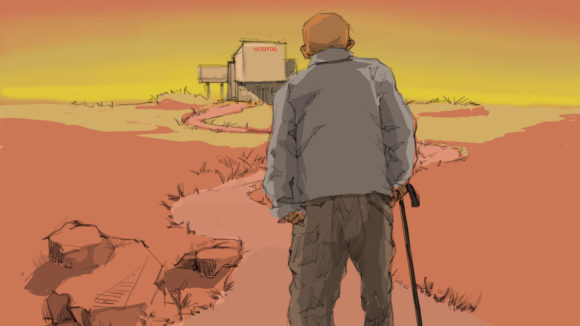 For many people living with neglected tropical diseases – including people with disabilities or from rural communities – services are unavailable and unaffordable. We carried out research in Nigeria aimed at understanding the experiences of people with NTDs, and how to solve the problems they face in receiving treatment. Read more about the research 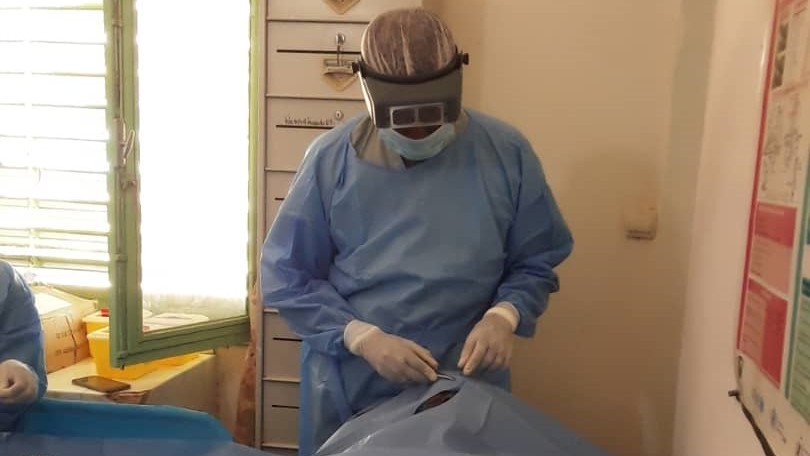 In the midst of the COVID-19 pandemic, many health services were forced to pause. However, patients suffering from symptoms of trichiasis (where the eyelashes turn inwards and scratch the eye) still needed help during this challenging time. Where it was safe to do so, and in line with country government and WHO guidelines, trained personnel like Babacar continued to work to save sight and stop pain. Read Babacar's story 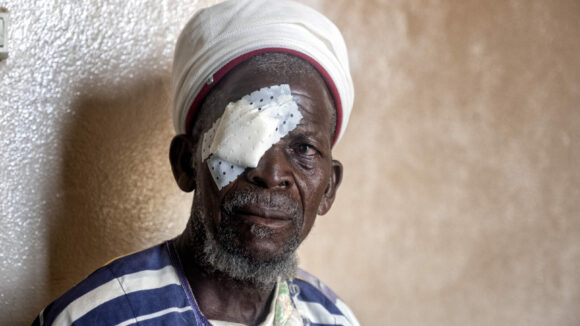 A billboard with COVID-19 messaging on it can be seen at the side of a road with cars a bikes going along it.

Sightsavers worked with M&C Saatchi to develop COVID-19 prevention campaigns in West and Central Africa. As part of our Ascend programme, COVID-19 prevention messaging appeared on radio, television and social media and also on billboards and leaflets. It aims to combat misinformation as well as focus on the need for hand washing, physical distancing and mask wearing. Read the news story 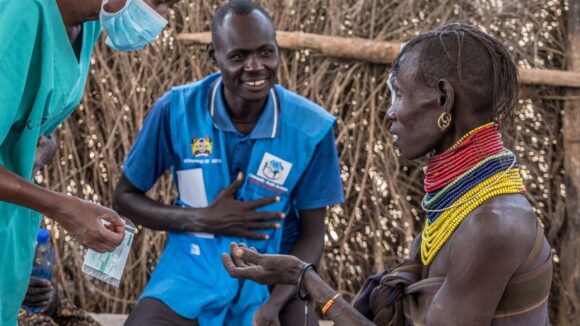 As the Commonwealth Fund came to an end in September, ten million people had been protected from trachoma in 10 countries. During the two-year programme, Sightsavers and partners delivered 11.7 million treatments to manage trachoma and carried out nearly 32,000 surgeries for the advanced form of the disease. Read the news story 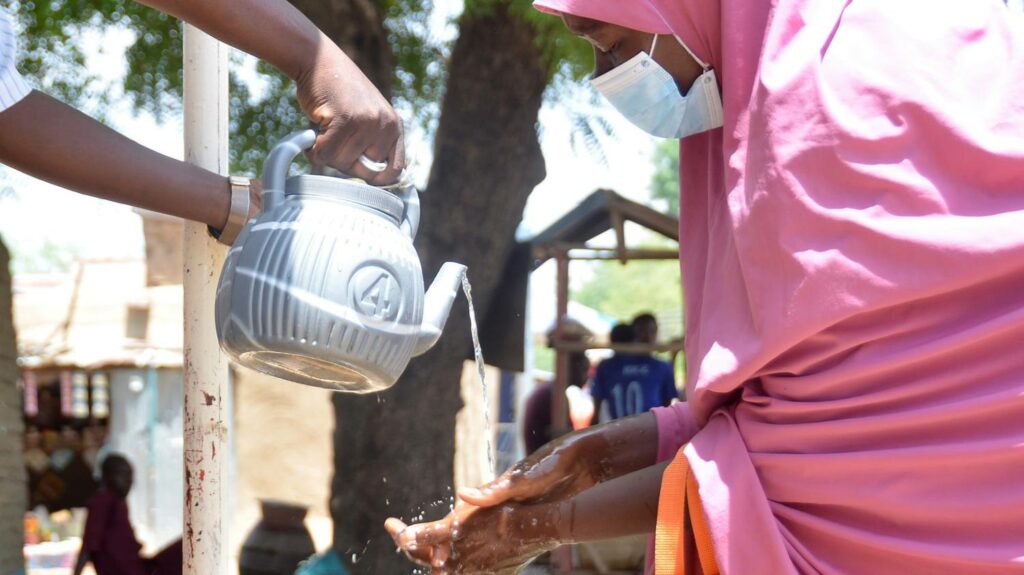 After many months of lockdown, the first trachoma treatments were able to restart in Nigeria. Before supporting the resumption of treatments, Sightsavers and partners conducted a rigorous assessment process in line with WHO guidance. Instead of distributing medicine to large groups in a central location as they used to do before the pandemic, trained local volunteers began to go from house to house. Read the news story 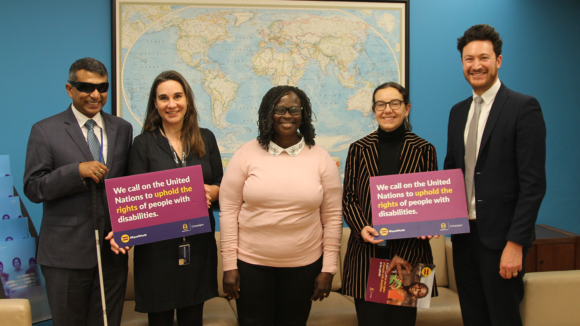 A woman working at a sewing machine wearing a face mask.

As the pandemic continued to affect lives around the world, Sightsavers staff in our programme countries worked tirelessly to adapt projects and make sure they continued to provide support to the people who needed it. Find out how they rose to the challenge from Bangladesh to Sierra Leone in our updates from the field. Read their stories

Although unable hold an awards ceremony in person this year, the judges were still amazed by the entries for Sightavers Ireland’s annual Junior Painter of the Year. The contest, open to primary school children across Ireland, inspires hundreds of budding young artists to promote equality for people with disabilities in developing countries through art. See the winning entries 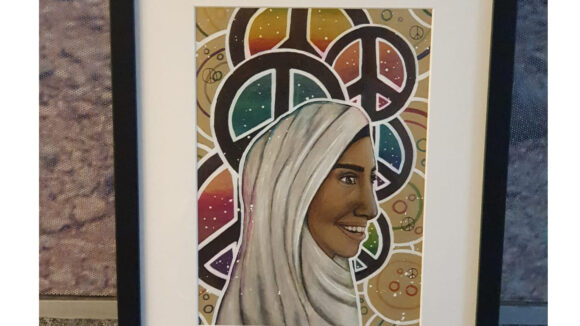 A young man sitting in the driver seat of a van. 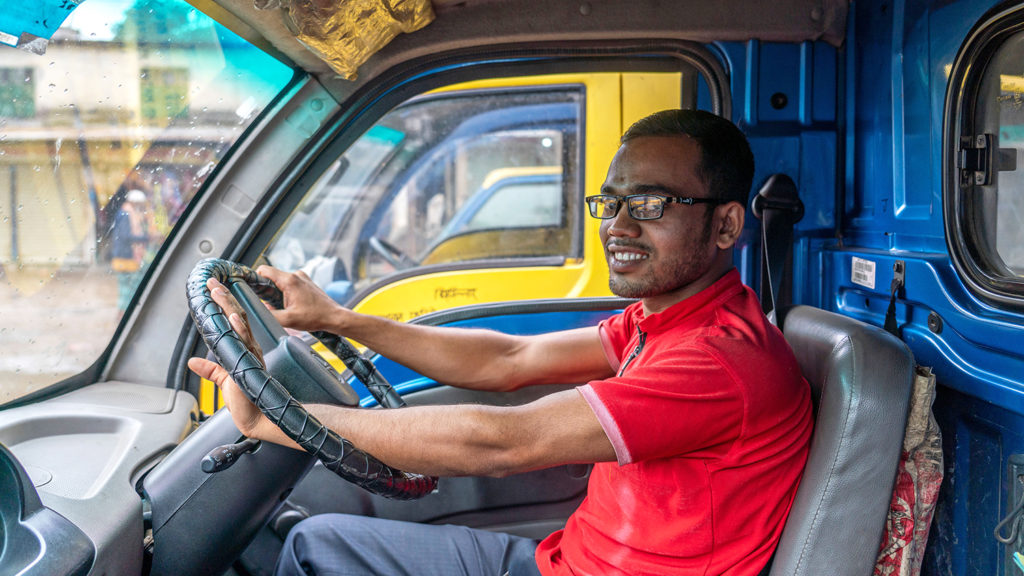 Sightsavers ended the year on a high by commemorating the monumental Seeing is Believing programme, which came to an end after 17 years. We highlighted the story of Arif from Bangladesh, who received a cataract operation through the programme aged five. He was able to learn at school, and now aged 20, Arif supports his family by working as a driver. He's just one person whose life was changed because of Seeing is Believing. Read Arif's story

Sightsavers Ireland created an interactive workshop for primary school children which explores inclusive education and disability. The workshop, which is funded by Irish Aid, uses animations, videos and quizzes to teach children about disability, and encourages them to become a ‘disability inclusion champion’! Visit the workshop 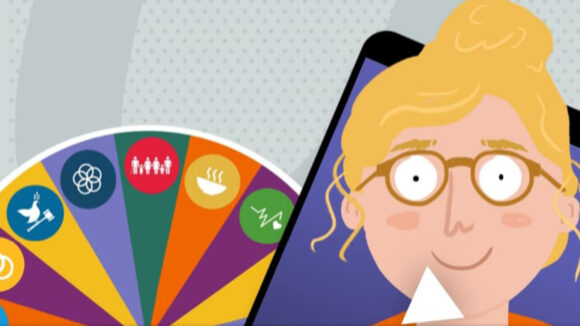 A man stands for a portrait while holding a colourful dose pole. 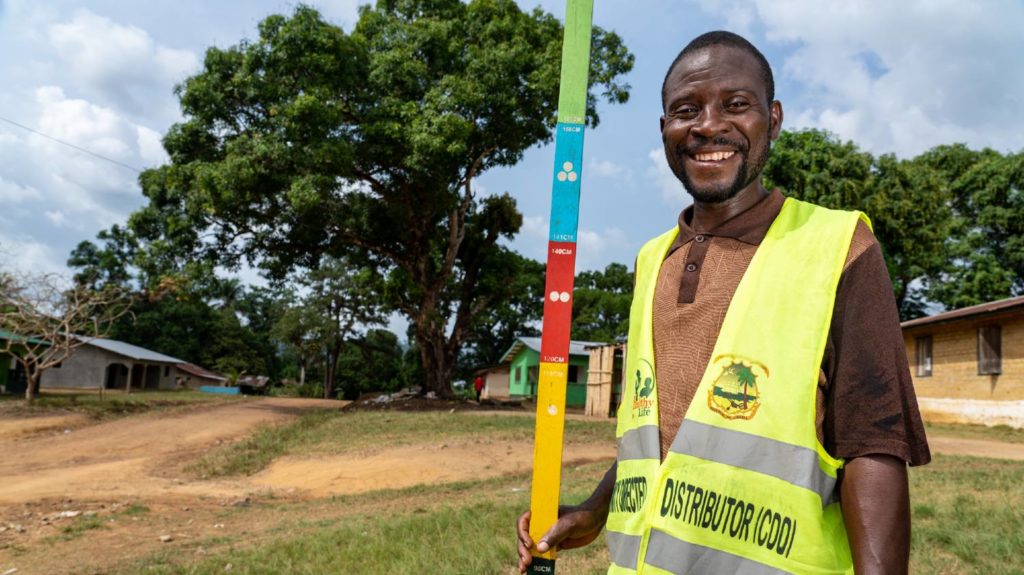 2020 has been a year we'll never forget, and the COVID pandemic has affected all of us. We're so proud of how our staff and volunteers all over the world have responded and adapted. And we couldn't have done any of it without our brilliant supporters – thank you for making our work possible throughout this difficult year.

What else has Sightsavers been doing this year?

Read our news and blogs