Frontline workers and programme staff dedicated to eliminating trachoma gathered at Buckingham Palace in the UK to recognise the achievements of The Queen Elizabeth Diamond Jubilee Trust’s Trachoma Initiative.

The five-year Trachoma Initiative, which ran in seven countries, was coordinated by Sightsavers and delivered by a network of partners.

The reception on 29 October, hosted by Her Majesty The Queen, celebrated the progress that has been made by the Trust, including its efforts to eliminate trachoma, the world’s leading infectious cause of blindness.

About 200 guests were invited, including frontline health workers from Sightsavers, with each guest given the chance to meet the Queen. Sophie, Countess of Wessex, who is vice patron of the Trust, spoke about the impact of the programme, celebrating the 26.6 million treatments that have been distributed and the 102,000 patients who have been examined and referred for treatment.

Sightsavers CEO Dr Caroline Harper said: “The Queen Elizabeth Diamond Jubilee Trust’s Trachoma Initiative has been a driving force in preventing millions of people from going blind. Thousands of people have given their expertise, time and energy to deliver trachoma elimination programmes on an incredible scale. The Trachoma Initiative’s contribution to eliminating blinding trachoma will be felt for decades to come and is rightly something to be celebrated as part of the legacy of Her Majesty The Queen.”

Sightsavers has worked with the Trust, ministries of health and members of the International Coalition for Trachoma Control to coordinate the programme in seven countries Africa.

During the past five years, the Trachoma Initiative has achieved many key milestones. It has:

A key part of the programme has been making sure local healthcare providers have the skills, resources and staff to prevent trachoma in the future. Insights and data from the programme are also helping ministries of health and non-governmental organisations understand how to tackle the disease, providing a vital source of information as countries work towards eliminating trachoma. 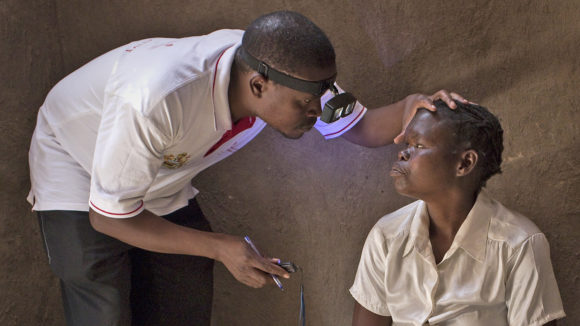