The world’s largest surveys into infectious disease have reached an important milestone, with Sierra Leone becoming the 50th country to be surveyed for trachoma as part of the initiative.

The series of surveys began as the Global Trachoma Mapping Project, later becoming the Tropical Data collaboration. On average one person has been examined for trachoma every 26 seconds since the surveys began in 2012.

Health workers have been going door to door since the start of the initiative, often in remote and difficult environments, checking people’s eyes for trachoma and recording the results on smartphones. This ensures health ministry staff can access fast, reliable data in the fight to treat and eliminate the disease.

Nancy Smart, Sightsavers’ country director for Sierra Leone, said: “My country is very close to eliminating trachoma, and cases are definitely very low. The results from the 50th Tropical Data survey will tell us whether we need to continue treatment or if the government is ready to submit proof of elimination for validation to the World Health Organization.”

Almost 10 million people have had their eyes checked for trachoma since the series of surveys started in 2012, even with the disruption of COVID-19.

The evidence provided by the surveys is vital in the fight to eliminate the disease, helping governments and health workers find people who still need treatment even if they live in very remote areas. Since it began, Tropical Data has showed that mass drug administration should be started or continued in more than 580 districts, could be stopped in more than 650 districts and that elimination has been achieved in more than 450 districts across the countries surveyed.

Around the world, 137 million people remain at risk from trachoma, and the work in Sierra Leone highlights both the challenges and importance of the surveys. Some of the final regions being looked at are on the border with Guinea, where Tropical Data has also carried out surveys and where the disease remains a public health problem. Diseases don’t respect international borders, and people moving between countries makes them some of the hardest places to monitor and treat patients. It is the health workers’ responsibility to find and check everyone so that no-one is left behind. 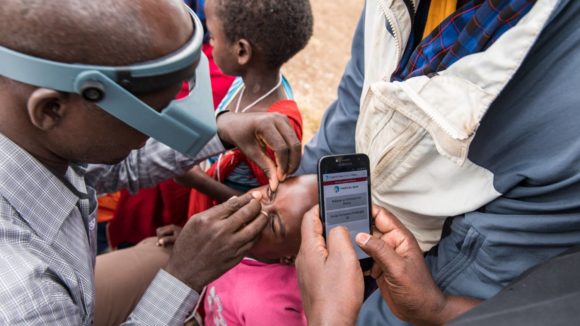 This large-scale project uses smartphones to gather data for targeting trachoma treatment as part of the global fight towards trachoma elimination.