Cameroon has become the second African country to begin to ratify the African Disability Protocol (ADP), which addresses unique issues and discrimination that affect people with disabilities living in African countries.

The protocol was adopted by the African Union in 2018, and enables countries to draw up disability laws and ensures citizens are able to hold their governments to account. Mali has already adopted the protocol, but it will only come into force once it has been ratified by 15 member states of the African Union.

The president of the Republic of Cameroon has also signed and ratified the UN’s Convention on the Rights of Persons with Disabilities (UNCRPD), which aims to protect the rights of and transform attitudes towards people with disabilities. The move to ratify both pieces of legislation follows years of campaigning by disability organisations.

As part of its Equal World campaign, Sightsavers is working with disability groups and other partners to call on African governments to ratify the ADP ahead of the Global Disability Summit in February. It has worked alongside disability rights groups such as the Platform Inclusive Society for Persons with Disabilities, and partners including the Cameroon Commission and the UN Centre for Human Rights and Democracy in Central Africa.

Sightsavers Cameroon country director Dr Joseph Oye said: “We’re delighted that the government of Cameroon has listened to our campaign and formally ratified these protocols. They will be key to ensuring the rights of people with disabilities in Cameroon, as well as millions more across Africa.

“These milestones have happened in the lead up to this year’s Global Disability Summit in February, for which we call on all governments to make concrete commitments to and action on disability inclusion.”

Sightsavers Cameroon programme manager and advocacy lead Boma Cliford said: “People with disabilities in Africa are significantly less likely than their peers to be in school, have jobs or participate in political life. Legislation like the ADP gives people the power to change this.”

Sightsavers will continue to advocate for the ratified decrees to be submitted, and will support Cameroon’s Ministry of Social Affairs and disability rights groups to communicate the importance of the convention and protocol to communities, government stakeholders and the public.

Watch our video to learn more about the African Disability Protocol.

The display shows how Sightsavers and its partners are using mobile technology to combat diseases such as trachoma and river blindness. 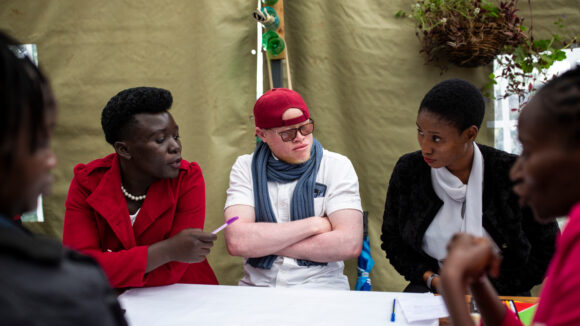 Sightsavers worked with the Kenyan government and partners to create the country’s first inclusive data action plan, which will help collect high-quality data about people with disabilities and the barriers they face.

Join our campaign to fight for disability rights