Your incredible kindness could help to restore the sight of a child with cataracts and open up the world of education – before it’s too late. 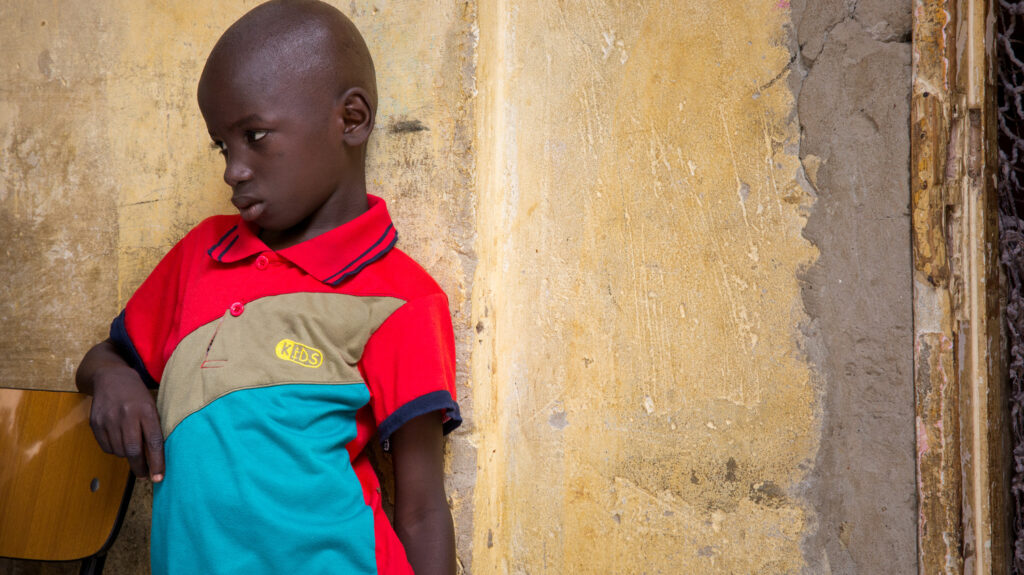 Standing quietly with his head bowed, eight-year-old Souleymane held on to his dad, Mor, in the doorway of their home in Senegal.

Souleymane had suffered from cataracts since he was very young. He couldn’t see well enough to go to school, play, or even move around safely on his own. Other children scampered about laughing, running and playing. But Souleymane stayed inside, almost hiding behind the safety of his father’s protective frame.

Mor said: “We had hope that I would find a solution one day. It was because of that hope that we kept making the effort, his mother and me. We kept going everywhere, doing everything possible.”

Mor and his wife, Aminata, had gone from hospital to hospital. They would queue before dawn, trying to find help for their son. But they met dead end after dead end. Finally, they were told that an operation was the only hope to restore Souleymane’s sight – but the cost of surgery was completely beyond Mor’s income as a tailor.

“I didn’t have the money for his treatment. I feel I have the responsibility to find a way to get him out of this situation. But I cannot do anything.”

For anguished parents, learning about Sightsavers can provide the first glimmer of hope. For Mor and Aminata, it all started with Samba, a local teacher who, as part of Sightsavers’ inclusive education programme, had been trained to assess and teach children with visual impairments and other disabilities. With Samba’s help, Souleymane finally got his chance to have a life-changing cataract operation.

Children like Souleymane can only wait for so long. Cataracts need to be treated as early as possible if a child’s sight is to be fully restored. Will you help provide the lifeline a parent like Mor is looking for, to free their child from cataracts?

The day after his cataract operation, Souleymane could already see some change in his vision. His face illuminated with a shy but warm smile: such a long way from the solemn expression he wore before.

As Souleymane started to regain his sight, he soon began catching up on his education. Mor is over the moon to see his son enjoying school, learning to read and write and getting good grades. “Souleymane was diminished by his vision – but that is all the past,” he explains. “Now, he can recognise his ABCs and 1 2 3. I have a heart filled with joy.”

His mother, Aminata, is overjoyed by the change in her son. Now that his vision has improved, she says he’s no longer isolated from his classmates.

“He’s now playing with other children, riding a bicycle and even playing football. He is not sitting alone any more.”

By reaching Souleymane in time, we were able to give him the treatment he so desperately needed. He is now able to play with friends and go to school, giving him the chance of an independent, bright future.

Sadly, Souleymane’s story is not unique. There are still more children in countries such as Senegal suffering with cataracts, and their chance of a successful eye operation gets smaller as they grow older. Please, will you help change lives by giving a gift today?