Evidence gap maps are an exciting tool: as well as showing where in the world evidence exists on a particular topic, the maps make clear where the ‘gaps’ in the evidence are.

They were originally pioneered by the International Initiative for Impact Evaluation (3ie), and for the past two years Sightsavers has been building on this and creating evidence gap maps for eye health.
There are three Sightsavers gap maps available so far, on cataract, diabetic retinopathy and refractive error. Over the next few months we will add gap maps that focus on glaucoma and trachoma. 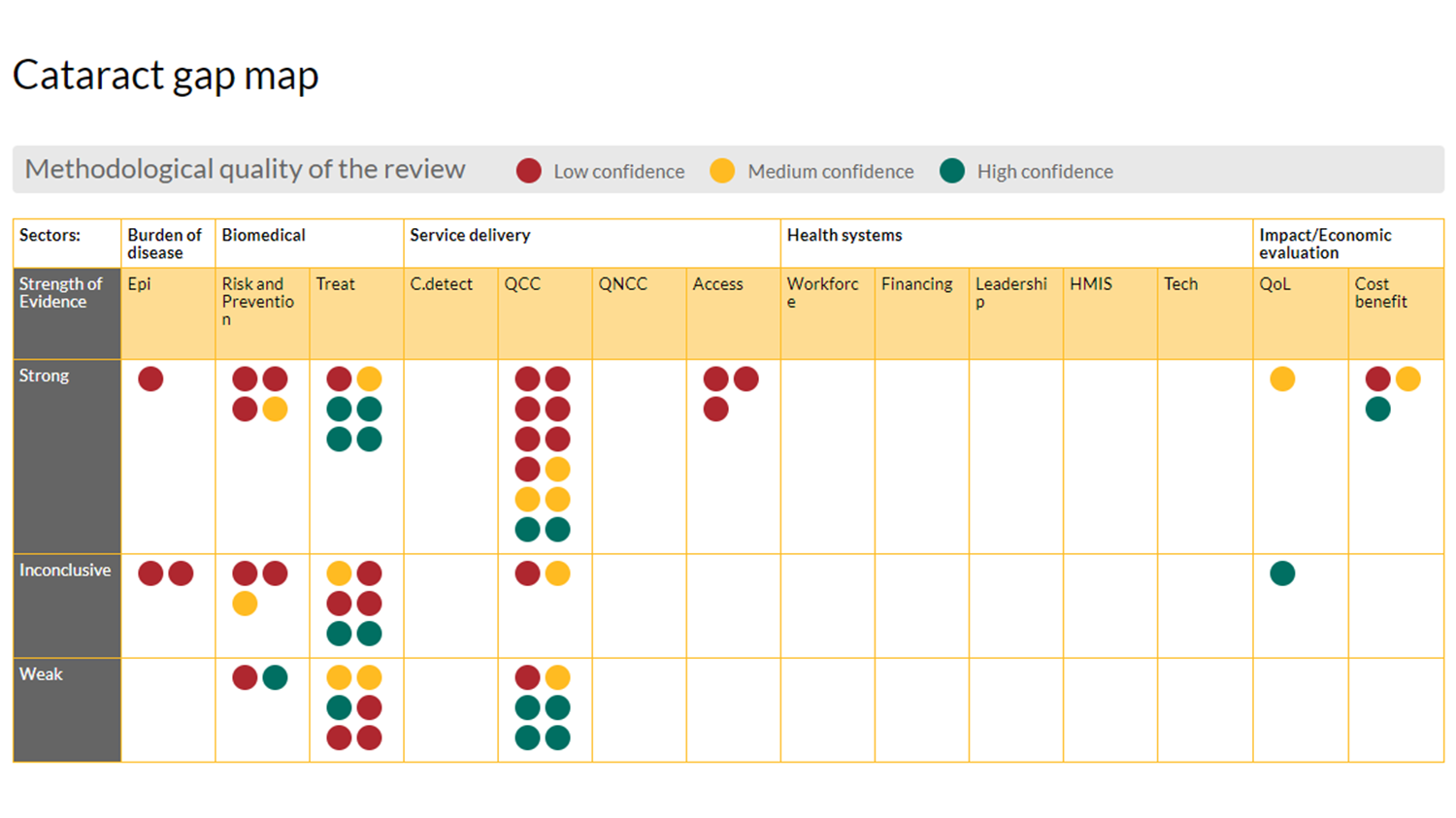 In the cataract gap map above, a total of 52 reviews were included, presenting evidence relevant to low- and middle-income countries. Most of these were in English, three were in Chinese, two were in German and two were in Spanish. Most reviews (20) addressed quality of clinical care, followed by surgical methods for cataract (18). Of the remainder, nine looked at risk factors/prevention, five were economic evaluations, and three each addressed the burden of the disease and the accessibility of cataract services.

In response to their research questions, 30 reviews provided strong evidence, 14 reviews showed weak or no evidence; and in 14 reviews the results were inconclusive.

As well as showing programme managers and clinicians where rigorous evidence on eye health exists, our maps can also be used to detect under-researched areas and focus future priorities. As a researcher, I’m interested to know which areas have less high-quality evidence as it will help me decide where to focus in the future.

Policymakers and clinicians can find answers to their most pressing eye health questions when they are designing projects and new initiatives. They’ll be able to see what the most up-to-date research is and draw conclusions about which approach might be most suitable for their purposes.

The eye health gap maps were developed by a multidisciplinary team from Sightsavers, the International Centre for Eye Health at the London School of Hygiene and Tropical Medicine, and the Cochrane Eyes and Vision Group. Our development process, insights and observations are unique for two reasons: this is the first time the evidence gap maps have been applied in the area of eye heath; and the development of the map was led by an international NGO with contributions from academic institutions, which provided opportunities to integrate academic and practitioners’ perspectives.

See the gap maps: View and share the link to the gap maps with your contacts – we’ll keep you posted on how they are being used by a different range of audiences.