This achievement came despite the outbreak of COVID-19 and the postponement in late March of mass drug administration, which is now gradually being re-instated. Surgery, home-based care and ongoing clinical treatment continued where it was safe to do so.

“It has been an extremely successful first year achieved through close collaboration with governments, our partners and communities. These large-scale cross-national programmes are not only effective prevention, they help grow stronger and more resilient public health systems to support the more sustainable elimination of diseases,” said Simon Bush, director of NTDs at Sightsavers.

The three-year programme to transform millions of lives by treating trachoma, river blindness, lymphatic filariasis, schistosomiasis and intestinal worms is led by Sightsavers in collaboration with the SCI Foundation, the Liverpool School of Tropical Medicine and Mott MacDonald.

In March, the programme also launched an unprecedented adaptation of the programme to help combat COVID-19. This included strengthening contact tracing and surveillance systems and developing and promoting COVID-19 prevention messaging through mass media campaigns, ensuring that they also reached people with disabilities and other populations at risk.

Some of the achievements of the programme include: 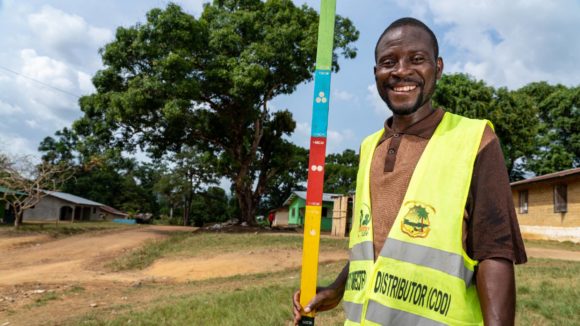 We are excited to be celebrating the achievements made in the first year of the programme. View our interactive story map, which details the key highlights with case studies and more.