A researcher from Sightsavers has been recognised for her work on a new project to control and eliminate two neglected tropical diseases (NTDs).

NTD research coordinator Kareen Atekem was selected as a finalist in the NTD Innovation Prize competition. Along with her fellow finalists, she was given the opportunity to present about her project at the NTD NGO Network (NNN) conference on 7-9 September.

Her project involves developing a new trap for ‘Chrysops’ flies that spread loiasis, a parasitic disease caused by the loa loa worm. This disease poses a major barrier to the elimination of river blindness, one of the most common infectious causes of blindness in the world.

If someone is suffering from loiasis and takes medication to treat river blindness (also known as onchocerciasis), they could have a serious, life-threatening reaction. This means that it is not possible to treat for onchocerciasis in areas where loiasis is present.

Kareen says: “The impact of this research is profound as it will allow more than 14 million people in Central Africa who are excluded from onchocerciasis treatment to receive the drugs safely.

“If successful, our innovative trap will also allow us to monitor ‘Chrysops’ populations, and eventually control the spread of these biting flies. This could reduce the risk of loiasis for whole communities and regions.”

The NTD Innovation Prize was launched in 2019 by American Leprosy Missions to support innovators with creative ideas to solve some of the most challenging issues posed by NTDs across the globe. The prize is awarded each year during the NNN conference.

Sightsavers led a number of workshops at this year’s conference, exploring topics such as how to make sure that NTD treatment programmes are more responsive to community feedback, and how to ensure that these programmes are accessible for people with disabilities.

In future, Kareen and her colleagues will seek to implement the project in areas of Cameroon known to have large ‘Chrysops’ populations, where there is a high prevalence of loiasis, and where this is co-endemic with river blindness.

You can find out more by watching the video below, where Kareen explains more about her project. 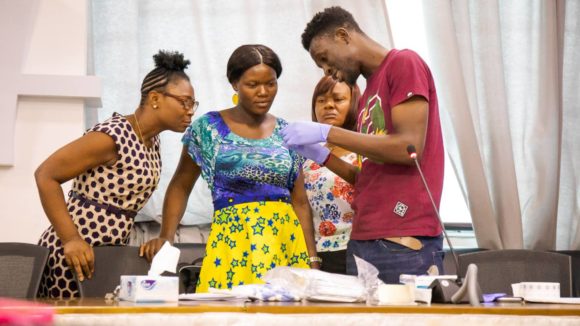