Changing perceptions about living with blindness through positive role models

George Abraham is CEO at Score Foundation in New Delhi, India, a non-profit trust that helps people with visual impairments. Here he explains why it’s necessary to change perceptions of blindness.

Our experience over the years clearly tells us that blind people largely exist in the fringes of our community. Being blind is not the problem, it is the perception and the understanding about a life with blindness that is the problem.

We need to work on people’s perceptions, both of sighted people and of those who are living with blindness.

We at Score Foundation believe:

It is perception that impacts the kind of education that blind people have access to, it determines the way parents respond to their children’s blindness, it determines how society responds to people who are blind, it defines how employers look at potential blind employees and it determines how governments roll out policy and programmes.

Given this insight, Score Foundation launched Eyeway, a single stop knowledge resource on life with blindness. We research and gather information; we disseminate information using a website, radio programme, SMS alerts and a helpdesk; we advocate for people who engage with us on our helpdesk and we engage with different audiences with a view to sensitise them and create awareness. We want people to look at possibilities and opportunities instead of dwelling on disabilities.

The television series Nazar Ya Nazariya which when translated means ‘Sight or perspective’ was an attempt to expose the audiences across the country to various real life individuals who have evolved to become active participants and players in the socio economic and cultural life of India. In the process, we want to shift the focus from the blindness to potential and possibilities.

We also shared content that demonstrated the incredible role that technology plays in transforming seemingly impossible situations into possible ones. To top it all we had two top names from the Indian film and television industry viz. Naseeruddin Shah and Harsh Chhaya to introduce and anchor the serial.

People who watched the serial said it was a wonderful production full of positive energy and powerful content.

The moment the phone numbers were announced, the calls to our helpdesk counsellors started and we received more than 800 phone calls cumulatively over the 13 Saturdays when our programme was telecast. It brought hope to many people across India.

One of these was from Abdula. He was losing sight and was told to quit his job. He had a family to support. He was considering suicide when he happened to chance upon Nazar Ya Nazariya and decided to give us a call. His conversation with the Eyeway counsellors empowered him to fight the system.

Since the television shows, we have been receiving a number of requests for interactive sessions wherein we screen edited versions of various episodes. Over the past 3 months we have held 24 sessions at colleges, B-schools, hospitals, professional forums, corporate houses and NGOs across India. People who attended said that the stories and paradigm suggested in the serial has given them new insights and perspectives that they had never even imagined.

These sessions have confirmed our belief about the lack of awareness and understanding of life with blindness. This is made worse because most government and funding agencies do not recognise this huge gap in perception as a problem that needs addressing.

Investments have to be made in areas like research to come up with evidence based knowledge in the domain, sensitisation campaigns using social and conventional media, advocacy alongside empowering people who are blind.

We have been running a helpdesk that blind people from across the country accesses. No agency has considered it worthwhile to support, again a case of perception. Blind and visually impaired persons have to be perceived as a resource and not as a liability. They need to be invested in. Only then will real change happen and the conversation will begin to change. 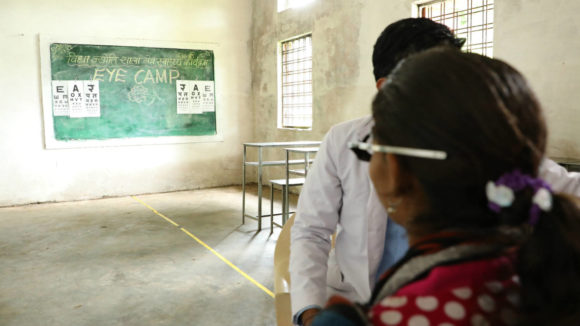