One of the main challenges in eliminating a disease is ensuring treatment reaches everyone, no matter who or where they are.

For neglected tropical diseases like trachoma, many of the millions of people affected are spread out across remote rural villages, and so this challenge is even more difficult. However, the two-year Commonwealth Fund, which closed in 2020, has shown ways to prevent those worst affected from being left behind.

Moses Chege, Sightsavers Kenya country director, who led the work in East Africa, shares how the team made this possible.

People who need trachoma treatment are often among the poorest and most marginalised in the world. They are ‘left behind’ while other parts of their countries or communities are growing economically or socially. This is often because these groups are physically hard to access; for example, nomadic communities in rural Kenya move from place to place for pastures and water, and others live in areas that aren’t safe to enter because they are prone to conflict and insecurity.

Even in communities that are better served, women, the elderly, the very poor or those with disabilities are at risk of being left behind. In some places, this can be because of a lack of knowledge about trachoma, including the misconception that it is a natural part of ageing, or because of gender inequalities, where women need permission from men to gain access to health services. We can only break the transmission of trachoma if we reach these people too.

Trachoma is a painful eye condition that can cause visual impairment and, if not treated, irreversible blindness. Mass drug administration can stem its spread and surgery can stop advanced trachoma from causing further sight loss.

The aim of the Commonwealth Fund trachoma work, supported by the Foreign, Commonwealth and Development Office, was to assist ministries of health and local communities in 10 countries in their efforts to eliminate trachoma as a public health problem.

In the last two years, the Commonwealth Fund supported nearly 32,000 operations for people at risk of going blind from advanced trachoma, as well as antibiotic treatment to clear infection for over 10 million people. In addition, 114 trachoma surveys were commissioned to gain an up-to-date picture of where trachoma was a public health problem and behaviour change interventions were carried out to promote healthy hygiene and sanitation practices.

But as well as helping vast numbers of people, we made concerted efforts to reach those commonly left out of health initiatives in three ways.

“We made concerted efforts to reach those commonly left out of health initiatives.”

1. Tackling the disease where people are most affected

Reaching ambitious numbers of people as part of health initiatives in densely populated cities is quite a challenge. But it’s a different challenge altogether to travel to and set up an operating theatre outdoors in a drought-prone, sparsely populated area with very limited infrastructure, as the Fund enabled us to do with a mobile team in Turkana County in Kenya.

Despite being one of the largest counties in Kenya, Turkana has only around two per cent of the country’s population, meaning people are spread out over miles of land. Because of this, they tend to be left out of healthcare plans and people seldom receive the treatment they should.

Ten years ago, the rates of trachoma in Turkana were one of the highest in the country. However, following a decade of concerted efforts, including going door-to-door to find and treat cases of advanced trachoma through the Commonwealth Fund, some areas of the county now have such a low level of the disease that large-scale work, like mass drug administration (MDA), is no longer needed.

If someone has trachoma multiple times, it can develop into advanced trachoma, or trachomatous trichiasis. At this stage, surgery is the only known way to stop their pain and prevent their sight from worsening.

However, experience has told us that not everyone can or will undergo surgery when it is first recommended to them. There are a variety of reasons for this: some people are afraid of surgery, especially if it is not a practice their community is accustomed to. And others might not be able to physically travel to their appointments because they are elderly, poor, have a disability, or because they have children or other family members to care for.

Through the Fund, we achieved low surgery refusal rates by pre-empting these issues and taking planned actions to overcome them.

First, we always spoke to community leaders before teams travelled to their villages. This made sure that influential community members were clear on the work we were doing so that they could encourage people with advanced trachoma to go for surgery.

Second, the volunteers we worked with were always known in the community, meaning patients were advised by someone they knew and could trust that surgery would help them.

Finally, to overcome the issue of travel that many faced, we arranged for transport to and from surgery appointments. We also offered the option for a family member or volunteer to accompany patients to reassure and comfort them.

3. Reaching as many people as possible with treatments

For MDA to work effectively, antibiotics need to reach everyone in a community or district at the recommended treatment coverage rate, which is at least 80 per cent of the population.

Careful planning, monitoring and special interventions to reach remote communities and those affected by conflict meant that we exceeded these targets in many places through our work with the Commonwealth Fund.

We achieved this by doing several things. Before we began each MDA campaign, we held detailed planning sessions with government officials, volunteer coordinators and community leaders. This meant that all groups were aware of their responsibility to proactively include marginalised community members.

For example, when people from marginalised groups couldn’t travel to receive treatment in a central location, teams established a ‘door-to-door’ service so they could receive antibiotics at home.

In addition, we created a plan to implement in conflict areas. In Northern Nigeria, for instance, because of the risks posed, mobile teams couldn’t dispense treatments by gathering large groups in central locations. Through close dialogue with community leaders, and by taking precautions when travelling, our staff and partners in Nigeria adapted their work to ensure communities could safely access services. 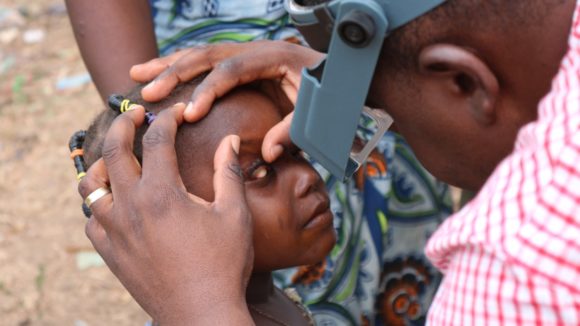 In Kenya, we are continuing to fight trachoma through the Accelerate programme.

As part of the 2030 Agenda for Sustainable Development, 193 UN Member States pledged to “endeavour to reach the furthest behind first”. But leaving no one behind in health interventions won’t happen naturally; it needs to be confronted with well-thought-through planning and targeted interventions.

Through the extra measures put in place for the Commonwealth Fund work, together with our partners we managed to reach people who could have otherwise been left to suffer from trachoma. And reaching these people is essential if we are going to eliminate a neglected tropical disease. After all, people are neglected, not diseases.

“Careful planning, monitoring and special interventions to reach remote communities and those affected by conflict meant that we exceeded targets in many places.”