In this rural region of eastern India, one in 50 people used to be blind. But through our Seeing is Believing project, eye health in the area has been transformed, changing thousands of lives. 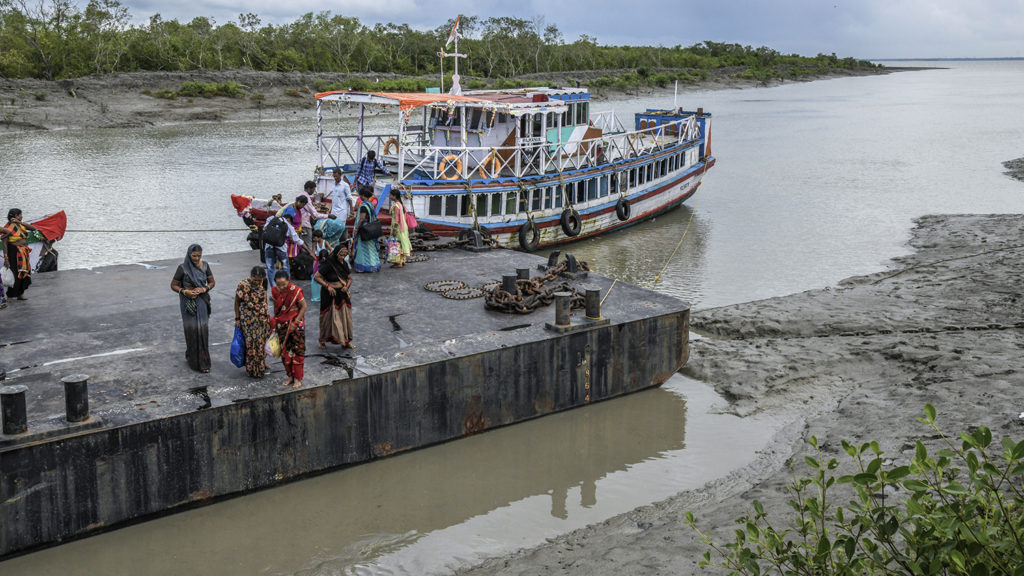 Across India, one in every 100 people is thought to be blind. But in the Sundarbans region, the figure was once one in 50.

The Sundarbans is a remote area of 102 islands in the delta region of West Bengal, India. More than 40 per cent of the population live below the poverty line. This makes it unaffordable for people to travel to a clinic for an examination, or to pay for treatment for common (and easily treated) eye conditions such as cataracts.

Luckily, Sightsavers’ Seeing is Believing project has helped to transform eye healthcare in the Sundarbans, ensuring people can get the treatment they need.

Between 2013 and 2018, Sightsavers’ Eye Health Service Strengthening Project, part of the Seeing is Believing project funded by Standard Chartered, overhauled the region’s eye care. Working alongside partners, the programme helped to create 17 eye health centres, and to screen more than 451,000 children and 401,600 adults for eye issues. More than 13,300 pairs of glasses were given out, and 32,000 cataract operations took place. Better equipment and training were provided in five hospitals, and people were told how to spot eye health problems.

New research shows the programme has made significant and long-term improvements to eye services for the 4.7 million people living in the Sundarbans.

Before the programme started, one in every 40 people over the age of 50 in the region was blind. Today, that number has dropped to one in 80.

So how did our work in the Sundarbans help to make such a difference? We made sure our services were located exactly where locals needed them. And this meant that travelling from the Sightsavers India office in Delhi was never straightforward.

32,000
patients had cataract surgery as part of the project

The journey to meet some of the people we’ve supported 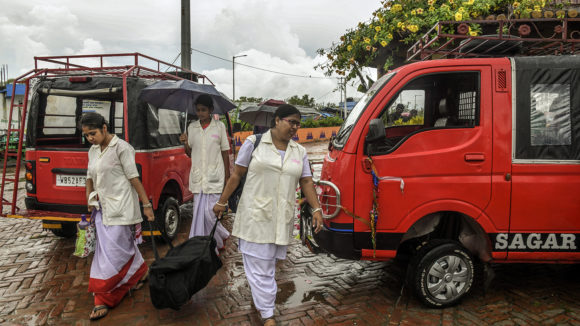 After flying from Delhi to Kolkata and a three-hour drive, the team arrive at Diamond Harbour. 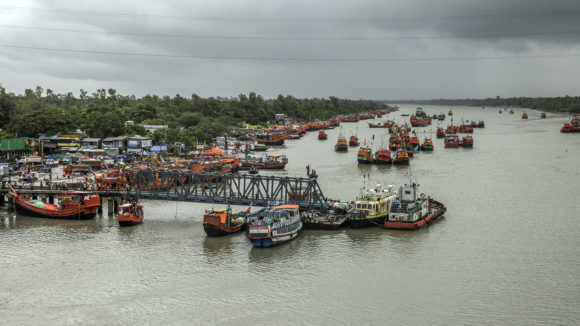 The next day, they drive two and a half hours to a ferry port packed with trawlers and commuter ferries. 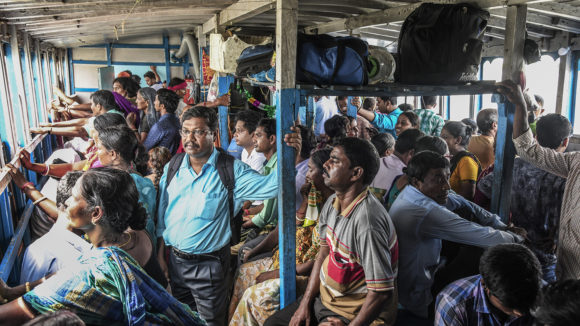 They then board a crowded ferry for a one-hour journey to one of the Sundarbans islands. 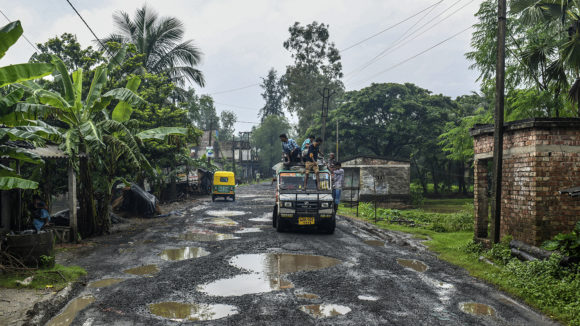 Finally, they drive for 45 minutes along poorly maintained roads to reach one of the vision centres.

A couple sit on a bed, smiling.

“I can see very clearly now. I can even use my fishing net at night now my sight has been restored.” 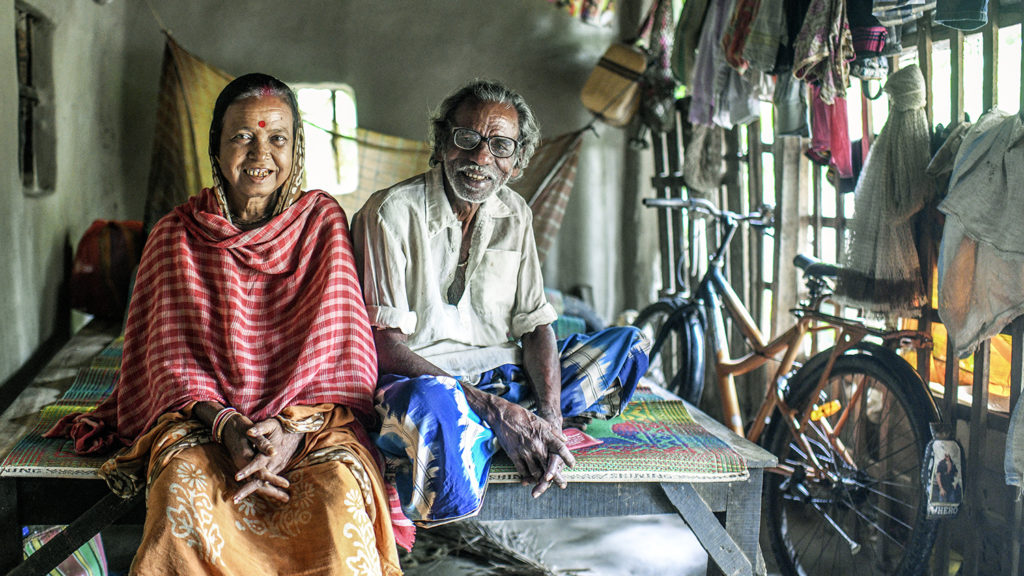 Debola lives with her husband Nami in a village in the Sundarbans. A few years ago they both developed cataracts and their sight deteriorated. Nami used to earn a living fishing in the rivers surrounding their home, but about nine years ago he had an accident while working, which he believes was the cause of his sight loss. As his vision failed, so did his ability to work.

Debola said: “I have two sons and one daughter. When I had my eye problems, I couldn’t see anything. Everything looked black – totally black. I couldn’t cook and feed my family properly because of the darkness.”

The couple were so desperate to fix their sight that they tried a number of remedies, including applying lotus honey, local leaves and even snails directly to their eyes. “I didn’t know what was causing my eye problems,” Debola explained. “My husband gave me molluscs and snails, we took the water out and then would pour it on a leaf. Then my husband would pour water from the leaf into my eyes to treat my blindness.

“It gave me satisfaction that I had been able to use some kind of remedy, but it didn’t make any difference to my sight.”

Fortunately for Nami and Debola, Sightsavers’ eye health project in the Sundarbans was able to help. They were referred to a nearby eye screening camp and offered cataract surgery.

After their operations, both Nami and Debola were able to return to their normal lives. Nami said: “I can see very clearly now, even at night. I can even use my fishing net at night now my sight has been restored.”

“I couldn’t cook and feed my family properly because of the darkness.”

“My biggest joy is being able to see my granddaughter again.” 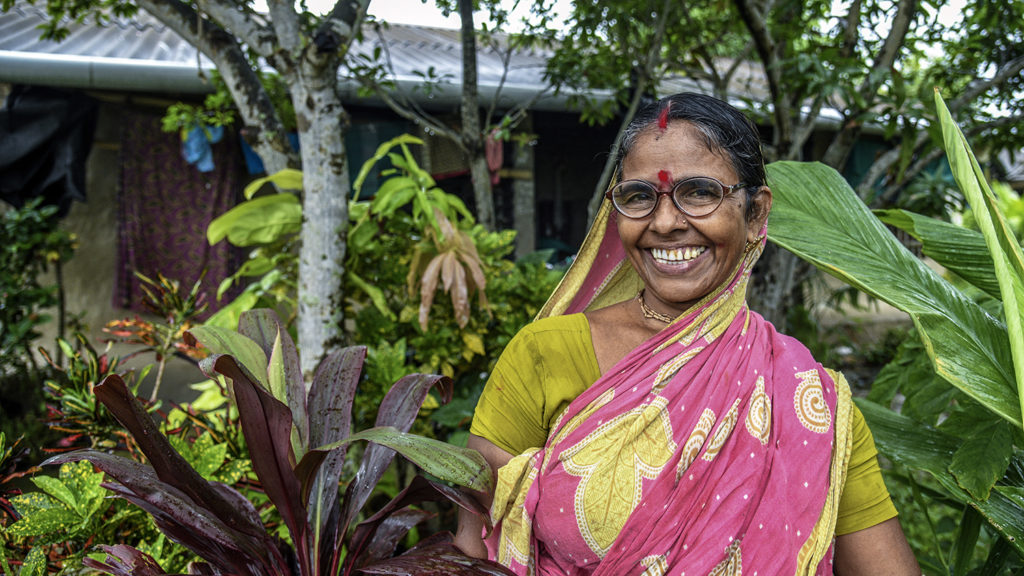 Sandhya is a 47-year-old teacher from Namkhana. She had refractive error, causing gradual sight loss that was limiting her independence at home, as well as affecting her ability to teach local children as she could no longer read school books. “When I started to lose my sight I was worried I that I might also become blind,” she explained.

Despite being relatively well off, Sandhya had never considered going to the doctor because the price of the spectacles was too high and the doctor was too far away. Namkhana is a village of lush and tropical vegetation, but it is also remote, with many places inaccessible during the rainy season.

One day, community health worker Laboni paid Sandhya a visit. “She told me that treatment is possible, and a screening camp will be held, so I could seek treatment there,” Sandhya recalled. She hadn’t believed that such a thing was available to people like her, she explained. “I thought it may be just a hoax – nobody would come to give us treatment.”

Sandhya went to the eye screening camp, which was run by Sightsavers just a five-minute walk from her house. She was measured for spectacles, and her new glasses arrived a week later. “I had never worn glasses in my life. They felt like a pressure on my nose – I had to get used to them. But now I am able to do everything I was not able to do before. My biggest joy is being able to see my granddaughter again.”

Since her initial visit, Sandhya has formed a strong friendship with Laboni, the health worker who originally referred her for treatment. By building these relationships with members of the community, Laboni encourages them to attend screening camps.

“The loveliest part of the work here is when someone gets their sight back,” Laboni explained. “Their happy faces make me incredibly happy.”

“I had never worn glasses in my life. I had to get used to them.”

A lady sits in a health clinic.

“I am very hopeful that after the surgery, I will be able to see.” 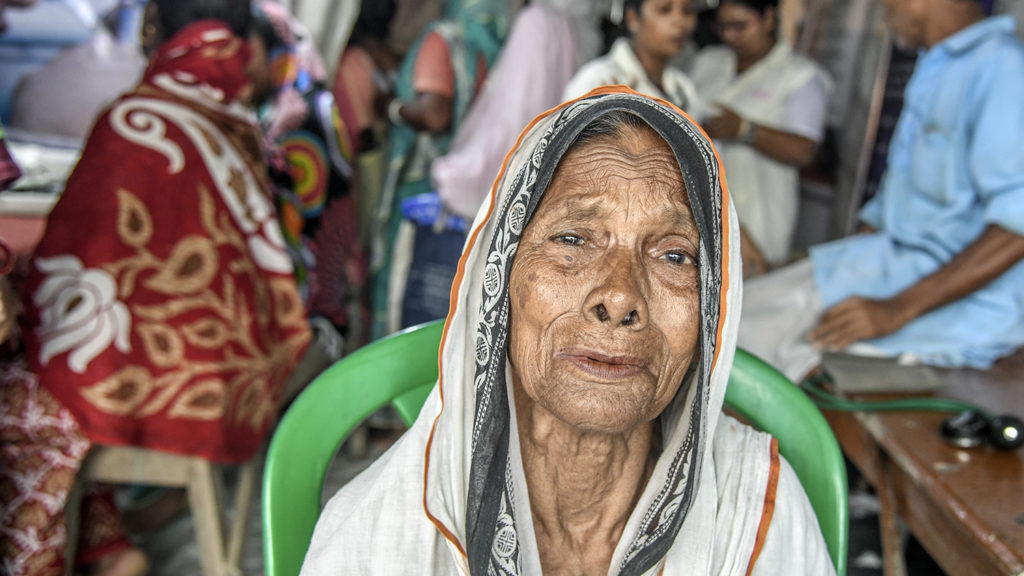 Sholeha is 90 years old, and cried as she talked to us about her daily routine. “I can’t see anything,” she explained. “I fall down a lot in my house.”

Cataracts had caused Sholeha to go blind, which made living on her own difficult. Thankfully, she found out about a Sightsavers eye screening camp being held a short walk from her home and after attending, she has been referred for cataract surgery. “I heard about it from my neighbours,” she said. “It took me 15 minutes to walk there. I am hopeful that aftr the surgery, I will be able to see.”

The lack of infrastructure in the region can make it particularly difficult for women such as Sholeha to get treatment. Many people find themselves isolated with little knowledge of what is available to them and, because of social conventions, aren’t able travel on their own. To counter this isolation, new services have been set up that go deep in to the heart of these communities. Outreach camps move around and sites are chosen that reach as many people as possible.

Many women attend the camps dressed in their best saris and enjoy the visit as a community event that provides a chance to leave the house and socialise. In this sense, the camps and local vision centres can be empowering for women, and there is a buzz about the place. Multiple house visits are made to convince those who might be wary or nervous about treatment, and every story of a successful cataract operation or new pair of glasses helps to encourage more interest.

I heard about the eye camp from my neighbours. It took me 15 minutes to walk there.”

Sightsavers carries out high-quality, independent research to support our work to fight avoidable blindness. We have our own dedicated in-house research team that contributes to the growing body of evidence and ensures our programmes are based on strong data, evidence and insight.

Our research helps us draw attention to the prevalence of visual impairments, highlight any gaps in services and support, and demonstrates new approaches that can make a positive difference to people’s lives. Visit our research centre to read the full research report.

Through community outreach in the Sundarbans, the project has raised awareness about eye health among the local community and provided information about the services that are available. Find out more about the project’s successes below. 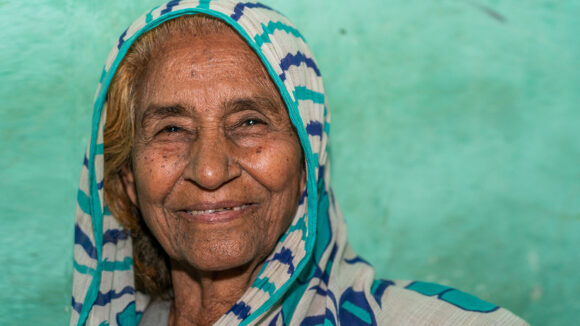 Seeing is Believing has screened more than 34 million people for eye problems across the world.

About Seeing is Believing

How our work has raised awareness in the community

The number of people who know the government has a health insurance scheme has more than doubled, from 38 per cent to 85 per cent.

The number of people who would visit an eye doctor if they were unable to see clearly has doubled from 44 per cent to 90 per cent.

The number of people who know that the government provides free cataract operations has nearly doubled, from 43 per cent to 81 per cent.

You can change lives for the better

Stories from the project 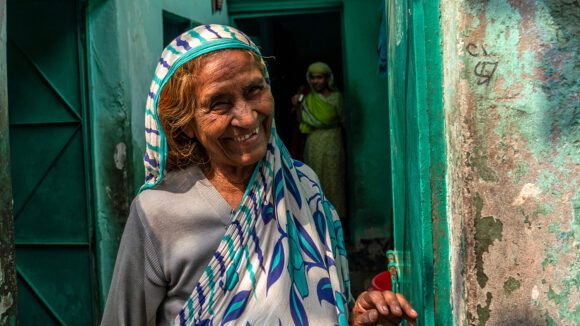 We caught up with Azimunnisa, who lives in a informal urban settlement in Dhaka, Bangladesh, 11 years after her cataract operation to find out how life has changed.