The ministries of health in Kenya and Uganda have joined forces to launch their first cross-border mass drug administration for trachoma, bringing the two countries another step closer to eliminating the disease.

On 21 October 2021, teams in key districts on both sides of the Kenyan-Ugandan border began delivering treatments for trachoma, a neglected tropical disease (NTD) that affects the eyes. If left untreated, it can cause severe pain and blindness.

Kenya and Uganda have both used the SAFE strategy (surgery, antibiotics, face washing and environmental improvements) to dramatically reduce the prevalence of the disease. As a result, Kenya is on track to meet the World Health Organization’s goal of eliminating trachoma by 2030, and Uganda is expected to do the same.

But eliminating the disease depends on treating those who have not yet been reached as part of NTD treatment programmes, including nomadic farming populations that regularly cross the border.

Wycliffe Omondi, head of vector-borne and neglected tropical diseases at the Kenyan Ministry of Health, said: “Mass drug administration (MDA) on its own is not a silver bullet. We must put in place collaborative mechanisms to ensure that prevalence remains where treatment has taken it to.”

In Kenya, the cross-border efforts are led by Kenya’s Ministry of Health, with support from The Fred Hollows Foundation, and funded through the Accelerate programme led by Sightsavers.

Michael Kirumba, Sightsavers’ deputy director for Accelerate, said: “Trachoma is a painful and debilitating disease with no respect for political borders. Congratulations to Kenya and Uganda for coming together to eliminate trachoma in districts along the shared border.

“No organisation can eliminate a neglected tropical disease alone. The Kenyan and Ugandan governments, donors, and other supporting organisations have worked together through a leadership and cooperation model that other countries can adopt to help end this cruel disease.”

Uganda’s cross-border efforts are led by the Ugandan Ministry of Health, with support from USAID’s Act to End NTDs East programme, led by RTI International. Benjamin Binagwa, chief of party for the USAID programme in Uganda, said: “This first-ever cross-border MDA between Kenya and Uganda represents the bold, inventive, and targeted action needed to achieve trachoma elimination.”

Synchronized treatment is one critical part of a wider cross-border trachoma strategy between the two countries, which includes sharing data on disease prevalence, mapping border hotspots, and discussing progress on the use of the SAFE strategy.

The Ugandan State Minister for Karamoja Affairs, Dr Maria Goretti Kitutu, lauded this accomplishment, which will help to reach nomadic farming communities that move across the border throughout the year. “I thank our Kenyan brothers for their efforts in working jointly with Uganda on trachoma elimination, ranging from joint surgery, joint MDA and behaviour change communication,” said Dr Kitutu.

Since 2018, Accelerate has supported the Kenyan Ministry of Health to work towards eliminating trachoma, with a focus on strengthening the health system to deliver NTD services so that long-term progress can continue. 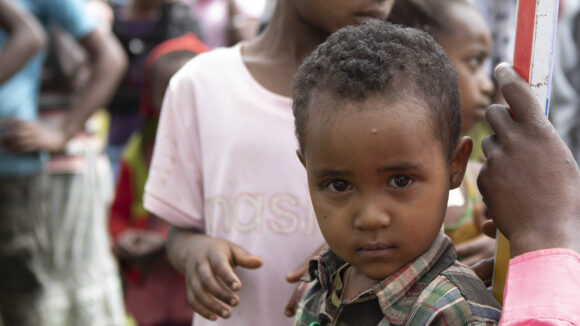 This Sightsavers-led initiative aims to eliminate trachoma in eight African countries by 2030.