Standard Chartered is a key partner in all four programme countries where Sightsavers’ Inclusion Works programme operates. The programme is testing innovative ways to improve job opportunities for young people with disabilities, enabling them to find decent work, earn a living and pursue their career goals.

Here Deus shares his own personal story of career progression as a blind person in Uganda and explains how, through the partnership, the bank aspires to influence other employers in the private sector to become more inclusive workplaces.

“For people with disabilities in Uganda, entering formal employment is a big challenge”

Facing barriers from the outset

When I was first offered a position at Standard Chartered 10 years ago, as a team assistant, I was working for the National Association of the Blind. I had graduated from university with a good degree, but had struggled to find full-time work. I felt I could only get a job in the disability sector, so spent a lot of time applying for jobs with disabled people’s organisations, and didn’t get much traction. After a couple of years of short-term contracts, I realised my greatest barrier was my own mindset – I was limiting myself. So I decided to start applying on the open market.

When I was offered my entry-level job at Standard Chartered, I reached out to some friends with disabilities for their opinion on whether I should accept it. A number of them discouraged me, saying: “You will be going into a different environment where people don’t understand your disability.” It frightened me.

But I weighed up my options and decided to be bold. It was the right decision. I set myself the ambition to be in a senior management position by the time I left.

Finding work as a person with a disability

But it’s clearly worse for people with disabilities. Why? Because there are a number of barriers: some at the individual level and others at the organisational level. My compatriots with disabilities who have struggled so hard to find employment: are we prepared for the open market? Are we really prepared?

When I first started at the Standard Chartered offices, I had great support from a network of staff all around the building: my manager at the time encouraged them to become my ambassadors. He was very kind. From my first day, he took me to the washrooms and introduced me to the neighbouring coffee area. For an entire month he guided me to facilities, introducing me to other colleagues.

But I would also make extra effort. I would come in on weekends, meet as many staff as I could, and ask them a lot of questions. I really wanted to be independent, so I had to put in more effort to familiarise myself with the place.

Being an international company, Standard Chartered is really open-minded, and knows about the support available for people with disabilities. The organisation is fully aware of the UN Convention on the Rights of Persons with Disabilities.

But the most important thing is the culture. The bank strongly believes in diversity and inclusion, and has great policies underpinning that. It’s a warm culture and people are receptive. 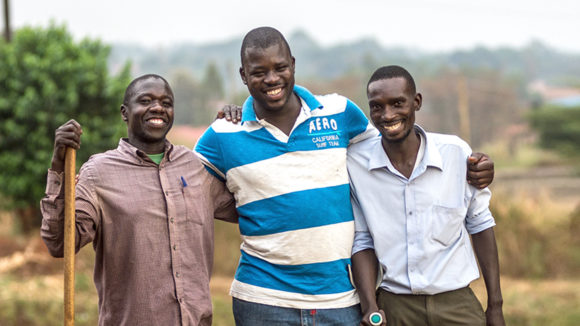 This programme, funded by UK aid, focuses on training people with disabilities in Bangladesh, Nigeria, Kenya and Uganda, and improving their opportunities to find formal employment.

From staff to clients: sharing experience

The bank is also very keen to ensure it considers the needs of its clients with disabilities in the communities. Considering its experience to date, and the culture it has established, it’s well positioned to be a key player in the Inclusion Works initiative. It has tested grounds that others may not have been able to, including government departments. It has a role to play to help people with disabilities develop their skills, and to support and encourage other workplaces to become more inclusive.

As a Standard Chartered employee, one thing I respect is that the organisation doesn’t take measures that are unsustainable. It doesn’t join incentive programmes sometimes offered by the government to employ people with disabilities in roles that they then prove unsuitable for.  If Standard Chartered employs you, it’s because of your ability to contribute to the agenda.

Bringing the private sector and government together

I hope that the Inclusion Works project and all involved will be able to learn from the experience Standard Chartered has to offer.

The prospect of different companies coming on board together is very exciting – it makes the potential opportunities available to people with disabilities all the richer and more interesting. No one entity alone can resolve the challenges that people with disabilities face in the jobs market. If the government is willing to work with the private sector, I think there is a lot that can be done to contribute to the formal employment of people with disabilities, while being mindful not to shame or criticise any of the parties involved.

I credit my own success to overcoming my self-limiting mindset and finding an inclusive workplace where I have been able to develop and apply my talents. My hope is that the Inclusion Works programme will make this possibile for many more young people in Uganda and beyond.