When looking for strong women in leadership, we need look no further than Sightsavers chief executive Dr Caroline Harper.

She has been CEO of Sightsavers since 2005: under her leadership, Sightsavers has expanded significantly, treating millions of people and advocating for policy reforms around the world. To coincide with International Women’s Day, we asked her a few questions about her career at Sightsavers.

Do you think women have to fight harder to reach senior levels in business or charity? And has this changed over the years?

It is certainly true that fewer women than men are at the top levels – particularly in business. I’m not sure I like the idea that women should ‘fight harder’, or that promotion should be down to fighting at all.

I think there are significant barriers to women: obviously there are issues related to their traditional caring roles (children and elderly relatives), which mean many women have a lot more on their plates than men during critical times when careers are built. I also know that a number of women (and increasingly men) I talk to are uneasy about the risk they are taking by going for the ‘top slot’. This isn’t just about work/life balance, but also about potential profile in the media, which in today’s world can turn nasty.

Which women in business inspire you?

Actually, I don’t look to famous women to inspire me – I look to those I know well. People like Dame Barbara Frost, who worked wonders at Water Aid, without ever being aggressive or pushing herself forward personally. Or my friend Louise Nettelton, now very senior at Deutsche Bank, who has survived some extremely difficult times (such as the fall of Enron) and, with determination and sheer Yorkshire grit, come out triumphant.

Have you experienced sexism in your career?

I think the surprise is perhaps how little I have experienced. I worked in the oil industry for many years, which is very male dominated, including with traders, but I was promoted often and always on merit. There were one or two who tried to use my gender to stop my progress, but fortunately they were never successful. Occasionally I have been frustrated by phrases like ‘she is emotional or strident’ (if I were a man they would have said I was angry), and obviously when I was younger there were the occasional inappropriate comments. But nothing a cutting remark didn’t crush.

Does Sightsavers have a specific approach to the ratio of male and female staff?

We look for the best people for the job and we don’t force-fit one gender or another for jobs to meet targets. We obviously monitor our gender balance for staff and trustees (as well as other diversity factors – at the moment I am concerned that we don’t have enough people with disabilities on staff). We try to ensure that we approach our policies and working practices in an inclusive way, such as being flexible where we can on working from home, and we check in with our employees regularly (and anonymously) to ask whether they are comfortable that we are an equal opportunities employer. If we then see that our gender balance is getting out of kilter, we try to look at the root cause of why this might be.

“When I was younger there were inappropriate comments, but nothing a cutting remark didn’t crush.”

Did you always want to lead an organisation – was that always an aspiration?

I can’t say it even occurred to me until the opportunity arose. I always wanted to be successful and was competitive academically (but not at sports, where I was useless). I didn’t actually lead a whole organisation, rather than a subsidiary or department, until Sightsavers, when I was 45.

Which of Sightsavers’ achievements are you most proud of?

So many things. I could list some of the huge advocacy achievements, especially in disability, or the transformation of the NTD space where we are now playing a leading role. Inspiring donors who never used to support us to look to our cause, both governments and philanthropists. Realising how many people we have helped – more than 10 million eye operations altogether. But if you ask me what I will look back on, it will be the people I have met and particularly those I have worked with. There is something special at Sightasvers – both in the UK and across our country offices – where people are extraordinarily dedicated to what we do, and so excited by how far we have come.

There isn’t one. I could be meeting donors, sharing what we have already done with their money and hoping to get them to give more. Or visiting a programme to see how things are going. Or preparing for a board meeting to ensure our trustees are properly informed. Or talking with my team (or indeed their teams) about decisions to be made, new opportunities to be followed up or indeed problems to be solved.

If you had to choose a photo that illustrates why you do what you do, what would it be?

There are so many beautiful photos. There are some images of people whose sight has just been restored, which are the absolute epitome of joy. Or the tragic photo of a girl with disabilities trapped in terrible loneliness because she was never allowed out. Unintentional cruelty brought about by ignorance. I will also never forget the image of Professor Stephen Hawking giving a keynote at our celebration of a billion treatments, when you could have heard a pin drop. It was his last public appearance and the more poignant for it.

How has Sightsavers transformed since you became CEO?

Sightsavers has been transforming for many years. Sir John Wilson built it from nothing into an organisation that, in a paraphrase of his words, ‘was able to change the world but be relevant to people in an African village’. Dick Porter took it forward, building up a base of committed supporters, many of whom are with us today. I have been able to stand on their shoulders and take it to an organisation which has a wider reach, a deeper impact and yet remains one which changes the lives of the most marginalised people – not just by the million but one by one.

Caroline Harper
Caroline is Sightsavers’ global CEO, a role she has held since 2005. In 2015 she received a CBE for services to people with visual impairments. More about Caroline

“There is something special at Sightsavers: people are extraordinarily dedicated to what we do.”

Read more about our CEO 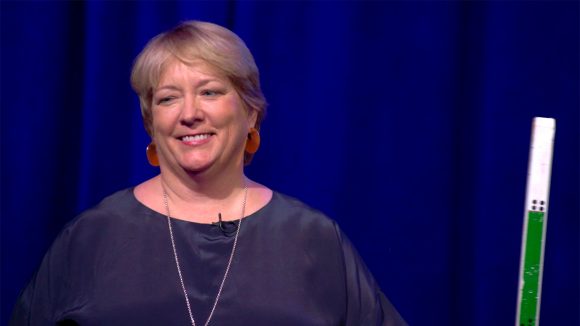 Sightsavers’ CEO was recognised for her work to help eliminate trachoma by transforming the way funding is secured.

During her talk at the TED conference in Vancouver, Caroline Harper urged philanthropists to support a new project that could help to eliminate the disease.